Centennial Boys Win Against Hebron To Advance To Regionals 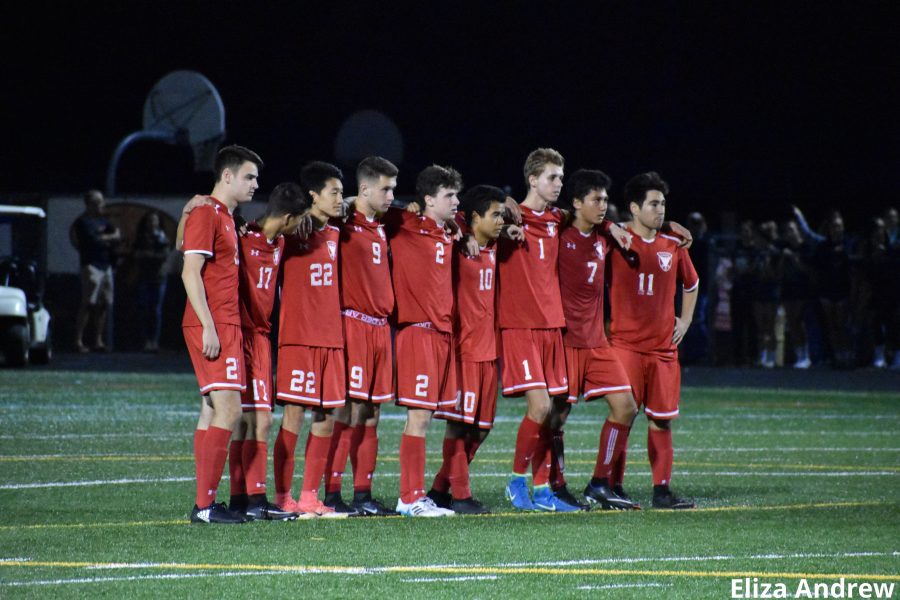 Words and photos: Eliza Andrew
On Friday, November 3rd, the Centennial varsity boys soccer team faced their biggest rival, Mount Hebron, in the playoffs to continue on regionals. Students from both schools came out to support their teams in the game, Hebron wore all black, while Centennial sported all white.

At the start of the game, both teams came out strong and determined to win. Centennial had the upper hand on the ball at the start, with possession staying on the offensive side for much of the first half at the game.

Unlike in the second half, Hebron had the upper hand this half, with Centennial’s defense pushing back as best as they could. However, the game ended in a 0-0 tie, putting the game into a 10 minute overtime.

During the extended play, the score stayed at 0-0 which lead into double overtime. Five minutes of sudden death play, where one goal would win the entire game. Both stands emptied out, as all of the students lined up behind the fence cutting off the field from the stands hoping to rush out to congratulate their team on their victory. The minutes of the second overtime had passed with the crowd getting louder, as they only got more anxious for their team to score. But once again, at the end of the five minutes, the score remained 0-0.

After two regulation overtimes came penalty kicks, the game was in the hands of the two goalies, and the 10 chosen kickers. Both teams made their first goals, Centennial’s being made by junior Matt Merkey, which made the score 1-1.

As the seconds wound down, senior Michael Pellegrini lined up at goal to kick, and as the whistle blew the ball landed in the back of the net. As Centennial students flooded the field out of excitement, the game ended in a 4-1 win.

Boys soccer now prepares for their next game against James M. Bennett High School, on Tuesday, November 7, at 5 for the regionals play-off game.
For more breaking news and photos, follow The Wingspan on Instagram and Twitter @CHSWingspan.