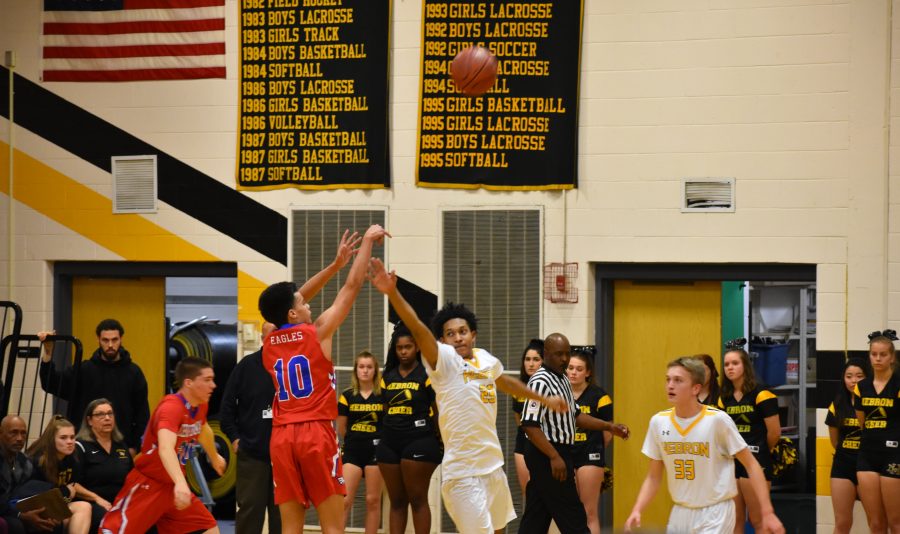 Words: Josh Horen    Photos: Sydney Beck
It took Mount Hebron five seasons to do it, but tonight they finally took down the Centennial Eagles by a score of 61-50.

The Mount Hebron vs. Centennial basketball game is one where the tickets are always sold out, and the fans are always insane. However, the Eagles needed a little bit more than just a roaring student section to get the job done tonight.

After last week’s dramatic loss to Atholton, Centennial was determined to get back on track with a win tonight.

The first man off the bench for the Eagles was Senior Shawn Hill. He got the call off the bench very early on and he brought the energy and the grit Centennial needed. He fought for rebounds, he dove for loose balls, and most importantly, he provided the offense.

After being called off the bench, Hill single-handedly brought the team back to life, and brought them the lead 10-7. He scored five points in less than three minutes and finished the quarter with nine points to give Centennial the 14-12 lead at the end of the first quarter.

Hill clearly stood out for the Eagles and was the focal point for the offense. The Eagles seemed to be playing with more poise and their defense was much more disciplined than last game.

After starting off the second quarter with a turnover, and letting Hebron tie the game within the first 35 seconds, Centennial found their groove very soon.

After allowing four straight points to the Vikings to open up the second quarter, Centennial’s Hill and fellow senior Sean Taylor ran the show.

Between the two players, they either scored or assisted on the next six Centennial points, heading a 6-0 run.

Hill had a lay-in off of a silky Taylor pass to tie the game at 16-16. The very next possession was followed up with a Taylor pull-up jumper from the free throw line to take a two-point lead, which was followed by another Taylor to Hill connection.

With 3:44 to play in the second quarter, the score was knotted at 20-20 before Hill made a beautiful defensive play and junior Stafford Smith capitalized on the Viking turnover with a lay-up to take the lead.

By halftime, Centennial found themselves down by one point, 29-28. The Vikings were out-rebounding the Eagles and were shooting better from the free throw line. Hill was most definitely the offensive weapon the Eagles needed, leading the way with 13 points, followed by Taylor with four points and a handful of assists. Senior center Hayden Ford saw limited minutes due to very early foul trouble.

The third quarter, however, was not generous to the Eagles.

Hebron tied the game with a free throw at 29-29 before erupting for an 8-0 run including back-to-back 3-pointers. With 4:48 left to play in the third quarter, Centennial was in an eight-point hole they seemingly could not dig out of.

The Vikings held a 40-29 lead with just over three minutes left in the quarter. After an offensive barrage from Hebron, Centennial was down 48-35 heading into the final eight minutes of regulation.

In order to regain the lead the Eagles needed stellar play out of their seniors, and better perimeter defense to slow Hebron’s 3-point shooting down.

After a quick 3-pointer, a Corey Eudell finish, and a Taylor 3-pointer, the Eagles cut the deficit to just six points with less than 2:30 remaining.

However, Centennial just could not get a shot to fall when they needed it most and they met their demise again tonight, dropping their second straight game.

Free throws again were an issue tonight, shooting 56% for the game and making only 1/4 of them in the fourth quarter.

Many fans were surprised to see the lack of playing time in the second half for Hill, who shined in the first half and seemed to be the answer offensively.

The team is frustrated with the loss, but don’t think that they are discouraged by this tough loss.

“I will always remain confident. I think a lot of our hiccups stem from our individual and team mental state. Overall though, I feel as if it won’t take long before we get clicking on all cylinders,” said Taylor, “the best is ahead of us and I will remain faithful in the team’s abilities. We have another chance to remedy our loss on Friday against Long Reach; we will be ready,”

Friday, December 15, the Eagles go on the road again to take on Long Reach High School. Centennial looks to pick up their first win of the season and start bringing back the winning culture.