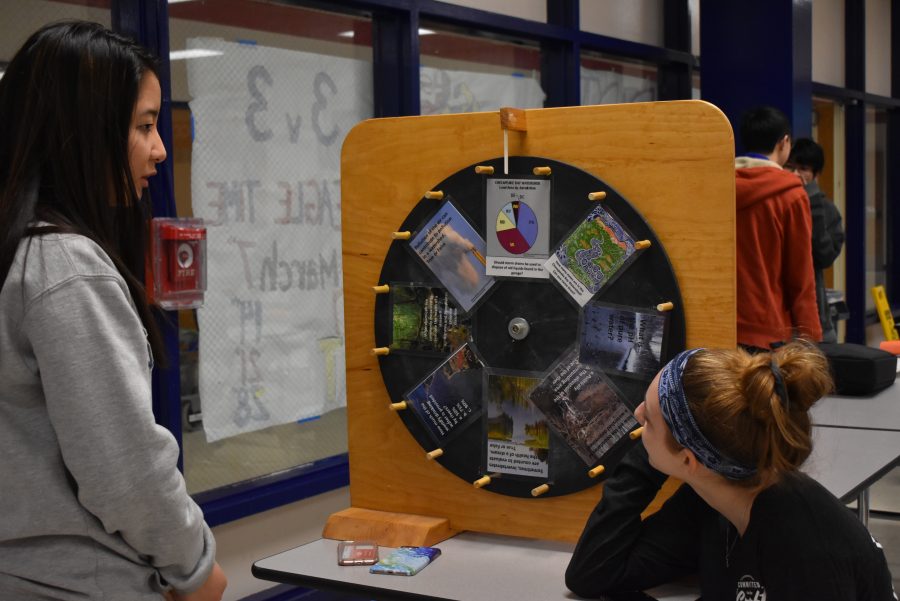 Words and photos: Maggie Ju
On Thursday, March 2, Know Your Planet Night was held in the cafeteria from 6 to 7:30 p.m. The majority of the presenters were freshmen or sophomores who did projects for either Earth and Space science or Biology class.

Along with neat, decorated boards, students engaged audiences with games and experiments. A watershed Spin the Wheel game, a tectonic plate puzzle, and an earthquake impact simulator were some of the creative formats in which topics were showcased.

One eye-catching exhibit was freshman Alexia Moreira’s solar system board game, designed with planets and asteroids on a starry background. Players had to answer a question correctly about a planet of their choice to advance on a trail to the Sun. Cleverly, the prize was Starburst candy.

Sophomore Jasmine Ji and freshman Kelsey Genovese were partners, supervising a hands-on experiment to extract DNA from a strawberry.

“This was one of the coolest experiments you could do with ingredients that are just lying around the house,” Ji said. The materials list included everyday items like dish soap, salt, and rubbing alcohol, and the procedure itself was less than five minutes long.

Genovese agreed and added, “I also like the topic of GMOs and this is a really cool, simple project to help introduce the topic of genetic engineering.”

Freshman Erica Zuo, who worked on a game-based project, said, “I really think that this night was quite successful because we got to educate people on our topic, which was GMOs. We also got to give out food!” The prizes for winning at her board were a generous handful of candy and a bag of chips, drawing dozens of people to her board throughout the event.

As the event came to a close, freshman Sophie Chao folded up her display with a smile. She concluded, “It was really fun, and I learned a lot tonight.”