Centennial Advances to Semi-Finals, Only to be Defeated By Atholton 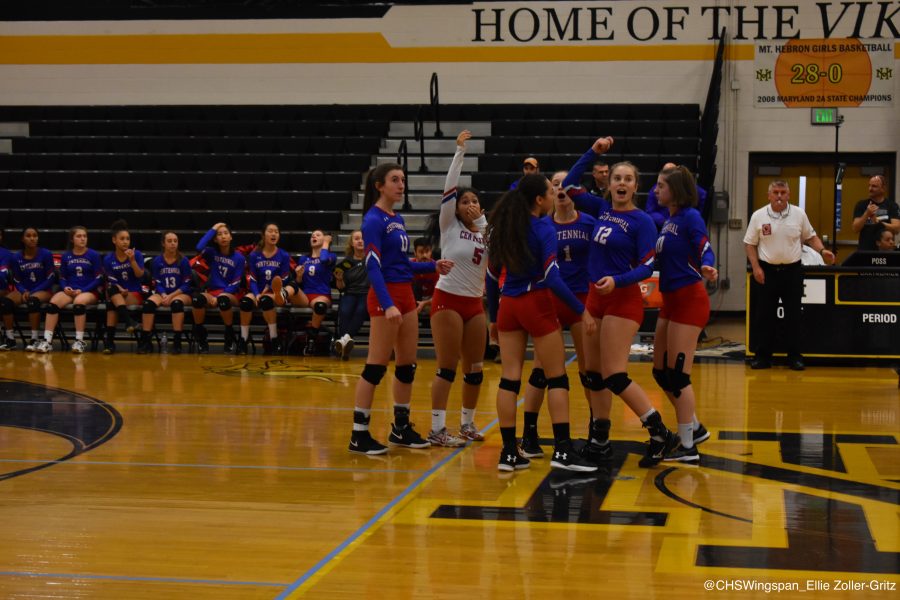 On Monday, November 5, Centennial’s Varsity Volleyball team defeated their rival, Mt. Hebron High School. Not only was it a big win due to the opponent; it ensured that the Eagles will move on in playoffs.

Although the game was close, Centennial managed to take three of the five matches.

In the first set, Hebron pulled ahead early with a three point lead, accumulating a score of 6-3.

Centennial quickly made a comeback and managed to bring the score up to 7-6. Despite their efforts, though, Centennial could not seem to keep their lead.

The Eagles kept fighting, but were not able to regain their lead, losing the first set by a score of 25-16.

By the second set, Centennial brought more determination to the court and got a lead early in the set, 2-1. Centennial was able to keep their lead throughout most of the second set with only a few close calls.

The girls were able to use their lead to defeat Hebron in the second set with a victory of 26-24.

Trying to contain their excitement from the previous set, Centennial pulled ahead with a 4 point lead. During this match, the teams were constantly playing catch up.

With Centennial winning two sets and Hebron only one, the teams entered the fourth set. During this set, Hebron was able to take the lead early, 7-2. Hebron maintained the lead throughout the set.

Even with kills from junior Sarah Allen and senior Jackie Sterenberg, Centennial could not catch up to Hebron, losing this set 25-21.

The stakes were high, and both teams had won two sets as they entered the final set.

Centennial was put on edge due to Hebron’s 4-0 early lead. Despite their nerves, the Eagles were able to pull off a win in the final set with a score of 15-8.

The Varsity Volleyball team prepared for the next round of playoffs on Wednesday, November 7, where they were defeated by Atholton High School in a 3 set match. The Eagles lost the final set 25-15, ending their season.