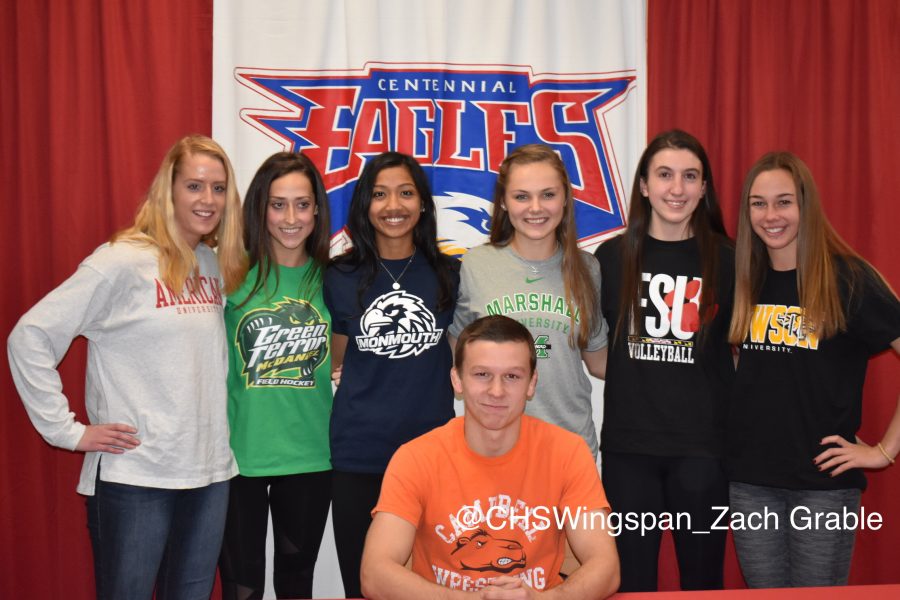 On Wednesday, November 13, seven of Centennial’s student athletes made their college intentions public.

Each of the seven had already committed to their college of choice, where they will go to continue their academic and athletic careers.

Although they all signed at the same time, none of the seven will attend the same college, and their sports of choice differ.

Both McVicker and Molz will be attending college to play Division 1 soccer, as they played together on Varsity for Centennial.

“Committing was really rewarding for me because I grew up wanting to play collegiate soccer,” McVicker expressed. “It made me feel like all of the effort and training I had put in finally paid off.”

She continued this by stating how she decided on a college.

“Choosing Marshall was a simple decision. As cliche as it sounds, the first time I stepped on campus I had a ‘this is it’ moment; I knew it was where I wanted to go to school.”

Betler is one of the few that chose to stay local. She will attend Towson University, a school in Maryland, for cross country.

Lagera is very proud of her accomplishments, and thanks everyone that helped her achieve them.

“Having my friends, family, and coaches [with me] made it even more special, because they too have worked so hard for me to be able to have this and I loved being able to share my success with them.”

Another committed student was Doff, who will play collegiate field hockey.

Sterenberg, a volleyball player, is another that felt it was important to find a college that is relatively close to home.

“I was looking all up and down the east coast and something about Frostburg made me feel comfortable and at home,” Sterenberg commented. “I am most excited to contribute to the team as they compete division 2 for the first time and be part of a welcoming atmosphere.”

Lastly, Kraisser, the only male athlete, will be attending college for wrestling.

“Something I learned as an Eagle is to always persevere,” Doff expressed. “I will definitely be taking that with me through college.”