Centennial JV Wrestling brings home a win, Varsity not as fortunate against Hammond 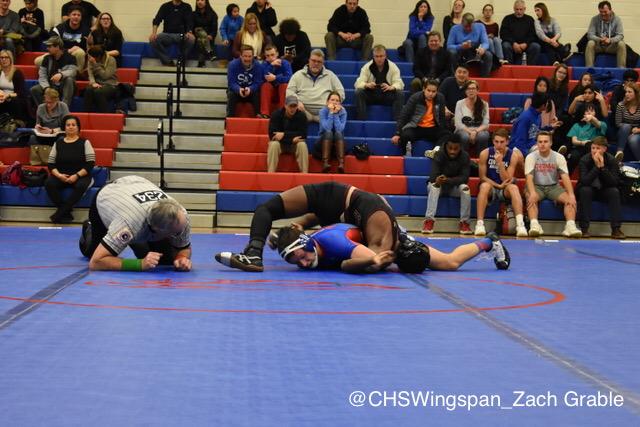 The Centennial High School JV wrestling team started the season off great, defeating the Hammond Golden Bears 48-34 on Thursday, December 6. Unfortunately, Varsity was not as lucky, ending the night with a final losing score of 46-21.

JV player, Ibaad Shaikh made excellent pins on his opponent and won his match. “I think we did better than last year,” said Ibaad.

Varsity player, Jason Kraisser scored the first few points for the Varsity team. His teammate, Chris Lee, had all eyes in the audience on him in his multiple-round match against his opponent. The tension in the gym was high, but Lee came through and won his match. However, his teammates were not as fortunate.

Both the Eagles and the Golden Bears worked very hard at last nights’ match, and we can be sure to expect more greatness. With this year’s wrestling team, Centennial is definitely going to be on its best game.