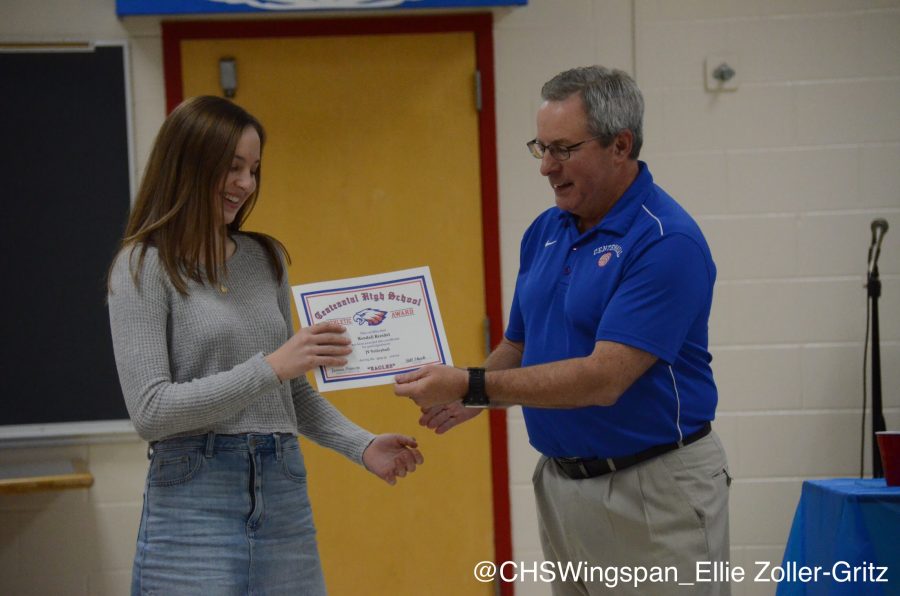 After a great season on the court, Centennial’s volleyball teams celebrated off the court with a cheerful banquet.

To kick off the evening, all the players, coaches, and families were welcomed into the cafeteria and greeted with food, brought in by the players.

Kenny Mills started the awards by announcing some of the top stats of the season. He followed this by giving his players certificates and sharing a quick few words about each player.

After lots of applause for the freshman team, Junior Varsity coach, Bill Shook, came up to award his team. He started similar to Mills by sharing the team’s top stats. He then called up each girl and told a story about them. Some were personal, funny, or even embarrassing.

After each girl was given their award, their teammates gave them thunderous applause and cheered them on.

Shook also announced that this would be his last year coaching, but said he is glad that he got to spend it with such an amazing team.

Varsity coach Michael Bossom followed Shook’s announcement by sharing that Mills will be taking over as JV coach next year.

Bossom continued the night by announcing his team and their performance throughout the season. He awarded each of his players with pins, certificates, and, for first year Varsity players, Varsity letters.

After all the awards were given the players each received superlatives from their team captains. These superlatives ended the night on a high note, along with one last cheer to close out the season.