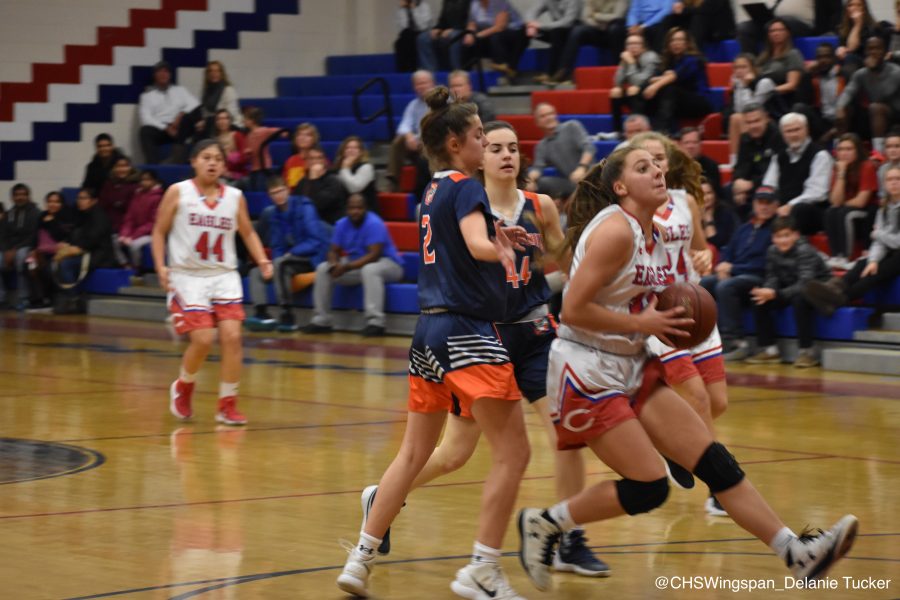 The game began rather slow due to exceptional defensive play on both sides of the court. It was not until four minutes in, when junior Brook Anderson broke the ice and hit a heavily contested three-pointer. The rest of the first quarter was back-and-forth. The Eagles would end the first quarter with a 9-8 lead.

Despite entering halftime with just a three-point lead, Centennial dominated the second quarter. Throughout the entire quarter, the Eagles struggled to get their shots to fall. Great ball movement led to open shots, but they were unable to convert.

With 20 seconds left in the first half, senior Jordan Dossett hit a deep three-pointer to beat the shot clock buzzer. Immediately after, senior Ashley Molz and junior Rasa Welsh trapped Reservoir’s point guard in the corner, causing her to travel. The crowd instantly jumped to their feet and applauded the girls as they retreated back to the locker room for halftime.

The Eagles struggled defensively at the start of the fourth quarter. Reservoir scored two three pointers on back-to-back possessions.

With just 1:30 left to play, Centennial took a two-point lead. On the following defensive possession, Dossett came up with an energizing block, causing Reservoir to call a timeout.

Despite great defensive play from the Eagles, Reservoir found themselves with one last offensive opportunity.

With five seconds left, Reservoir inbounded the ball to their starting point guard. She took one step in and pulled up from beyond the arc. She was fouled with just one tenth of a second left on the clock. She made all three free throws and Reservoir won by a score of 34-33.

The Centennial girls’ basketball team will travel to Broadneck for their next game, Wednesday, December 19.