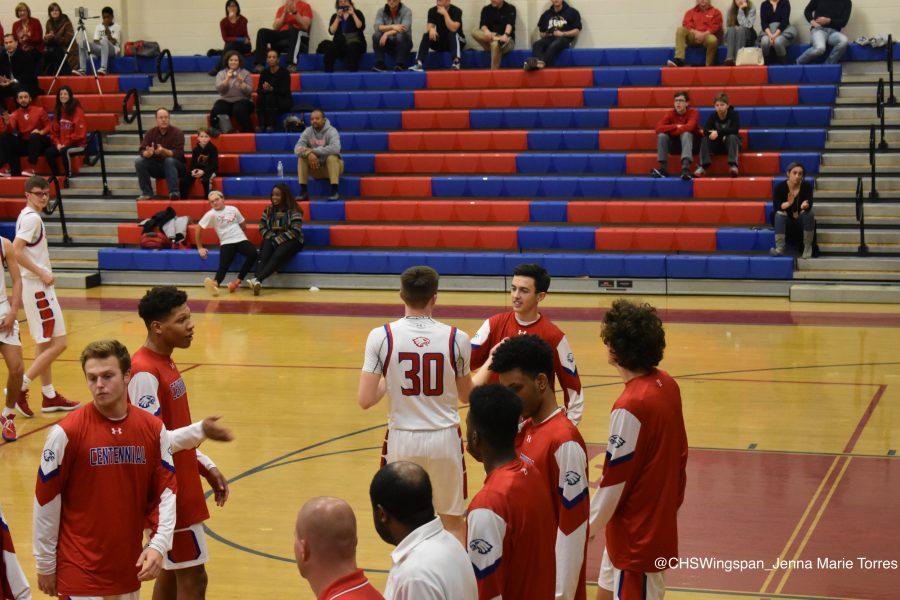 Centennial kept the score close throughout the entire game. It was not until the fourth quarter that River Hill took a lead that the Eagles were unable to recover from.

Although River Hill held an 8-6 lead at the end of the first quarter, Centennial dominated at the start of the game. Throughout the entire first half, the Eagles played strong defense. Due to immense pressure, they caused several turnovers.

Despite countless offensive possessions, Centennial was unable to convert on many instances.

Assisted by the defense, they held River Hill to just 18 first half-points, and entered halftime trailing 18-15.

As play resumed, Centennial’s offensive struggles only worsened and their defense began to fall apart. They turned over the ball on numerous occasions, resulting in fast break opportunities for River Hill.

Lead scorer junior Joey Sedlacko said, “We struggled with taking care of the ball. We could have attacked the basket more instead of settling for jump shots.”

Centennial trailed by eight points at the end of the third quarter.

The Eagles did not move the ball well in the final quarter. River Hill went on a 13-0 run after taking advantage of several consecutive turnovers. Centennial allowed 19 points in the fourth quarter and lost by a final score of 50-35.

“In the fourth quarter we turned the ball over too many times,” said Sedlacko.  “[Turnovers] led to transition points for River Hill, which widened their lead.”

The loss to River Hill was Centennial’s second in-county loss this season. They look to improve their 7-5 record this Friday as they travel to take on Oakland Mills at 7:00pm.