The Unsung Engineers of FTC Robotics 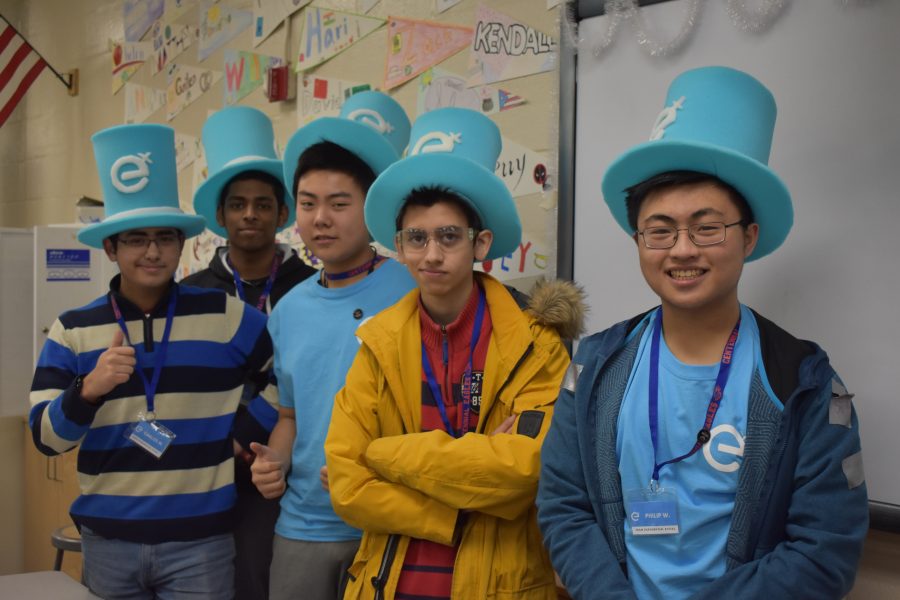 Words: Natalie Knight-Griffin
Photos: Eliza Andrew
Hidden down one of Centennial’s less crowded hallways (a rarity in itself) and down a rather dim, narrow corridor, is a computer science room- home to the FIRST Tech Challenge (FTC) Robotics club. As I stepped into the room for the first time, the atmosphere felt almost animated. I was instantly hit with a feeling of intense, pure joy. The sight of photographer Eliza Andrew with her camera, and I with my notepad, immediately garnered a beaming smile on the faces of each individual as the words, “the Wingspan!” jumped around the room. Two enormous robots sat in the center of the room surrounded by a protective barrier, and just beyond that, a mass of students with determined faces. My eyes jumped from one excitable huddle of bodies to another. Sophomore Diego Montemayor quickly grabbed an oddly shaped bag, pulling out enormous foam hats. The hats were tossed across the room, bursts of color and decoration meant to distinguish the individual teams, Exponential 15561 and VIRUS 9866, that were controlling each robot. As I realized I was getting lost in the sheer madness and spirit of the room, I gathered my bearings and remembered that I had a story to tell.

As sophomore club president Phillip Wang and junior Carlos Montemayor excitedly made their way over to Eliza and me, I couldn’t help but feel giddy. Why hadn’t we come sooner? They introduced themselves and set down various trophies and binders accumulated over only a few short months, proving the club had already distinguished itself in excelling in the art of competition. I asked Phillip how this all worked, how this group of high school kids had managed to transform an idea into a robotics-based enterprise. He grabbed a thick, Leslie Knope-looking binder, and began flipping through the pages as if he’d done it a thousand times, and could recite every word. I noticed that the binder was separated by labeled tabs, detailing things such as mechanical instructions, marketing, and the business plan. Under the marketing tab, there was a spread of the numerous sponsors that had allowed the club to have the necessary funding.

Phillip and his team have transformed the impressive hobby into a business-like, full-time job. After only a little over a year of operation, the club gained over twenty members and numerous sponsors. A $10,000 grant from the Department of Education along with $3,000 from various other supporting companies allowed the group to purchase two brand new computers, a 3D printer, and essential equipment. The group works tirelessly three days a week after school, as well as weekends. Their mission, above all, is to become more knowledgeable about engineering, programming, and marketing concepts while simultaneously spread awareness of STEM within the school community.

Two years ago, this business-like robotics utopia was just a budding vision. Phillip and his two friends, Andrew Zhao and Matthew Zhang, imagined turning their personal FTC team into a real club at Centennial. From there, they reached out to Nancy Smith, the PLTW teacher, and fellow students with an interest in robotics.

“In the beginning, our main motivation for creating this club was to share our passion for robotics with more students,” noted Wang. Moving into the school would give them better accessibility to be apart of our passion.”

Their success has been immense, winning over three awards in just their first year of existence.

“During our first year as a club, we won the first place Inspire Award at the Naval Academy Qualifier, placed second in the Motivate, Think, and Control Awards, and third place in the Connect Award,” Wang remarked.

“The Inspire Award is the biggest award that a team can win at each competition, as it is given to the team that embodies the ‘challenge’ of the FIRST Tech Challenge program,” he added. “The team that receives this award is a strong ambassador for FIRST programs and a role model FIRST Team. We also qualified for the 2017-2018 FIRST Worlds Championship.”

In their second year, both teams Exponential 15561 and VIRUS 9866 qualified for States after winning the first and second place Inspire Awards at the Parkdale High Qualifier. The teams will be competing at the Maryland State Championship at UMBC in March.

As I excitedly scribbled my final thoughts into my notes, I took a final look around the room. Each cluster of laughing faces, the robots zooming towards one another, the pure bliss of the environment- a second home. There were so many words I could think of to describe this robotics enterprise, the STEM heaven single-handedly built from passionate freshman friends. If there’s one thing I can say, it’s that I will never underestimate this unstoppable group of young engineers.

For FTC robotics, it’s not the thrill of the awards, nor the rush of the competition, that motivates their endless time commitment and work ethic for the club. It’s pure passion.

“This is such an invaluable opportunity for any high school student to have. This club gives us an opportunity to essentially operate a start-up company,” said Phillip. “It gives us a chance to share what we are passionate about with others for the betterment of the community.”

To read this article in the March print issue click here.