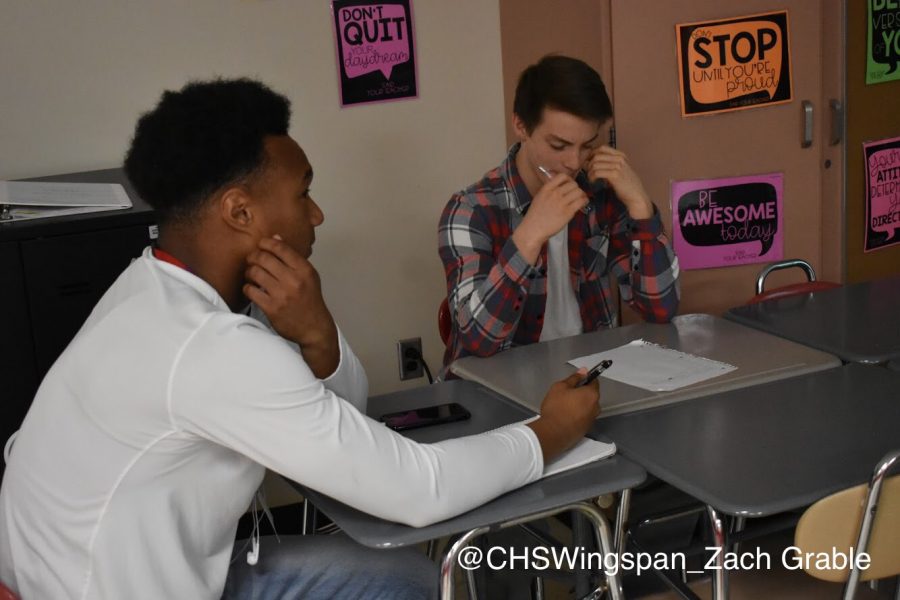 Words: Sasha Allen and Emily Hollwedel
Photos: Zach Grable
On Wednesday, March 27, six students from Long Reach in the Howard County Student Exchange program visited Centennial to see what it was like to go to a different school.

Overall, the response to the exchange day was positive. “It’s not too different from Long Reach, but it’s very unique,” said Elijah Saunders, a junior at Long Reach. However, Sanders did notice a social difference.

“Everyone [at Centennial] seems to get along with each other pretty well, but at Long Reach people are pretty distant,” said Saunders.

Other Long Reach students saw a different side of the social interaction at Centennial. Jada Sanders, a visiting student, decided to ask James MacLellan, Centennial freshman and her guide for the day, about the rumors she had heard.

“I heard some stuff about how it’s ‘clique-y,’ and I asked [James] if that was true and he said in some ways, yes because people like to stick with their own groups and sometimes don’t talk to other people.”

“Despite what group people associate with, [Long Reach students] talk to other people,” says Sanders. She was excited to participate in the exchange day, and was glad she went. “I wanted to have an open mind and see what you guys did on a daily basis… I heard things [about Centennial] but I went to see for myself what it was.”

The visiting students did come to an agreement on the biggest difference at Centennial, and Long Reach student Sui Cin highlighted this variation between the schools. “The diversity of the school, that is very different. I think that here, it is very distinguished, but if you go to Long Reach it’s so mixed… here you can see [what types of] people go [to Centennial].”

Sanders also seemed to notice this difference. “Looking in most of the classes and in the halls, demographics [are very different than at Long Reach].”

Cin also seemed particularly impressed by the fine arts at Centennial. “This school has many fine arts. I was watching theatre and you guys were so passionate about it.”

Rachel Henry, a senior at Wilde Lake and the creator of the program had the chance to visit Glenelg on Wednesday as well. “The halls are very quiet at Glenelg. You won’t hear chatter…it’s just silent.”

However, she, like the Long Reach students, noticed the difference in diversity.

“[The swap day] was the first time in all of my years of schooling I had a class without any African American people. Though I tried not to notice race as much, it was inevitable.”

On April 3, Centennial students will travel to Long Reach and Glenelg students will go to Wilde Lake. Although all of the students noticed differences between their schools and the exchange school, they were able to come together and share their experiences at the two schools, and students look forward to the next exchange day.