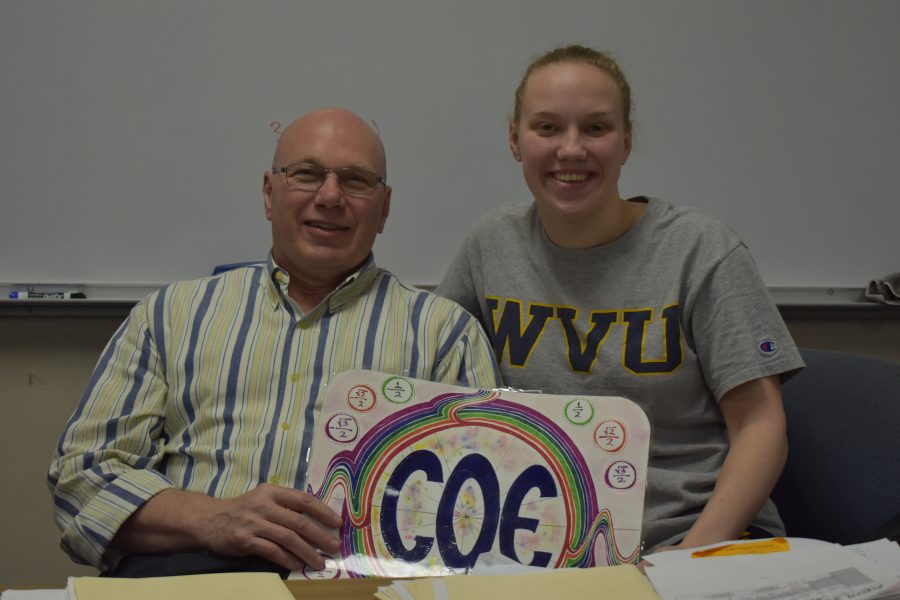 Words: Delanie Tucker
Photo: Eliza Andrew
For the past 37 years at Centennial High School, students have walked the halls, whispering about a certain class and how its teacher never fails to match his shoes to his outfit.

Math teacher Alan Coe is commonly known for his coordinating clothes, sarcasm, and, more often than not, strictness in the classroom.

It’s no secret that his class is harder than most, but at the end of the day, his students have nothing but positive things to say about their experiences in his class and, more specifically, their bittersweet feelings towards his retirement.

“While the material was rigorous and often confusing, Coe was always very dedicated to helping students understand the material,” junior Piper Berry commented. “He would always answer my millions of questions until I understood the concept.”

Berry had Coe for two years, and during that time he left quite the impression.

“Coe taught me that I am capable of way more than I think I am. He always encouraged me to try my best and keep going when I was stuck,” Berry stated. “Even when I would doubt myself he would push me to keep trying and believe I could do it instead of giving up.”

Sophomore Kiran Vepa said, “It was a hard class, sure, but nothing I couldn’t handle. It sucks that he’s leaving, though, because he made an impact on so many people and now no one else will get to experience that.”

Prior to working at Centennial, Coe studied at Buffalo State College in New York, majoring in teaching and minoring in mathematics.

Out of college, he did three years of teaching in Virginia and Southern Maryland, before settling in Howard County.

Centennial was a new environment for everyone involved, as it was a fairly new school, but Coe adjusted easily and enjoyed the spirited atmosphere the school upheld.

“In the first 15 or 20 years of being here there was a whole lot of school spirit, and it wasn’t just around the academics,” Coe stated. “It was a sports-oriented school. This school was huge in athletics.”

Another thing Coe has grown to admire about Centennial is what it teaches.

“[Centennial is] driven to make sure students are ready for everything that they are going to do,” Coe said. “Whether they go into college or go into a career, it really does try and get them ready for the next step.”

As for his own impact on Centennial, he believes he has done well to teach his students independence, and that they will carry that skill with them as they finish high school and move into college.

According to Coe, he taught them “to be able to think on their own. To not have to rely on someone else to tell them exactly what to do.”

While Alan Coe has been making a difference at Centennial for a long time, he is not the only one who will leave a lasting impact on the school. His daughter, Kayleigh Coe, is another Eagle who will be leaving at the end of this school year.

As a freshman at Centennial, Kayleigh was more out of the loop than most. She went to a middle school with kids that would go to Mount Hebron High School, which is where she would have gone had her father not been a teacher at CHS.

“At first, I was hesitant because I was leaving all my friends,” Coe stated. “However, I realized that I was going to have an opportunity to make new ones.”

Despite her unfamiliarity with her fellow classmates, the school itself was nothing new, as she “grew up here and scootered around the hallways.”

“I will definitely miss that once I graduate and my dad retires.”

Another thing Kayleigh will miss as she moves on to college is her English teacher, Sara Duran.

“[Duran] has taught me so much in the two years that I have had her,” Coe expressed. “She inspires me almost every day to try and never give up.”

Similarly, Duran expressed her feelings on having Kayleigh as a student, and how her presence in the classroom made a difference.

“Kayleigh was a very dedicated student and constantly came to class prepared,” Duran commented. “She was a pleasure to have in class both years and I know that my class would have been a completely different place had she not been there.”

Regardless of her father being a teacher, Coe’s academic success was due to her own motivation and determination to work hard in the classroom.

She explained that her parents never had to push her in school, and her father’s presence in the school hardly affected her work rate.

“I don’t think going to my dad’s school made me try harder,” Kayleigh Coe said. “I already try hard in all of my classes.”

Coe continued by saying, “My parents don’t really put any pressure on me with grades because I already put enough pressure on myself.”

This consistent work effort in school was awarded with an academic scholarship to West Virginia University.

Even though Alan Coe never really had to push his daughter, he was still there for her when she needed it.

“My dad has supported me through everything and I’m so lucky to have him,” Kayleigh Coe commented.

Alan Coe also said a few words about his daughter, explaining that in her years at Centennial he did, in fact, teach her.

“I taught her for only one year.”

And that she did teach him a thing or two.

In their time at Centennial, both Coes will leave an impact on the people and place around them, one that will stick, even after they’re gone.

Likewise, Centennial, whether it be the people or the place itself, is leaving a lasting impression on the pair, teaching lessons that may not have been learned otherwise.

Kayleigh Coe, in particular, said that she’ll do well to remember what she learned as she moves out of high school and into the real world.

“One thing I’ve learned [at Centennial] is that no matter how hard things are at the time, you will always come out on the other side.”

This article is featured in the 2019 Senior Issue.  To see the full issue, Click Here!