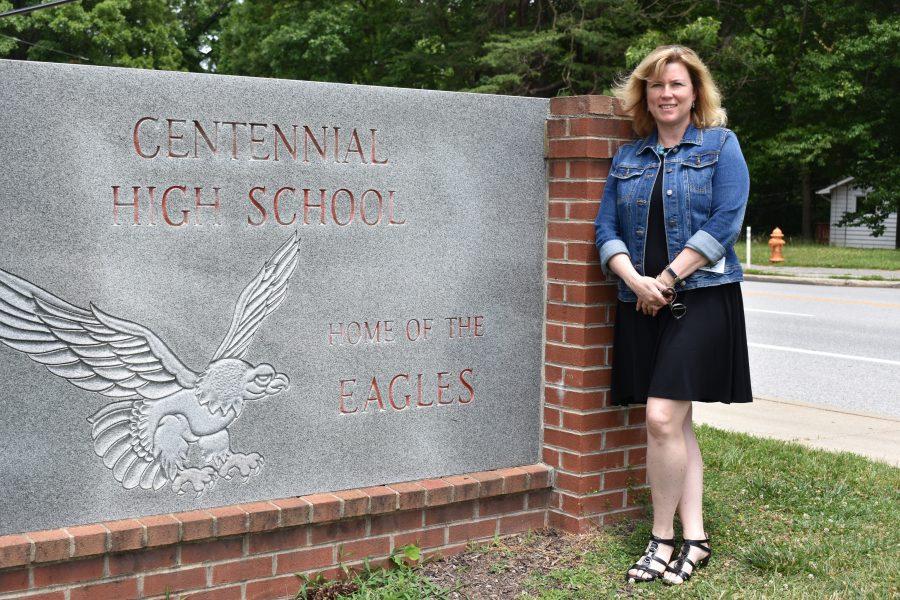 Words: Natalie Knight-Griffin
Photo: Eliza Andrew
In a school of 1,612 students, a single face passes by new principal Cynthia Dillon. She says hello, just as the student smiles with a welcoming invitation to their club event later in the week. With a beaming look she says, yes, of course!

Dillon, after almost 180 days of being principal of Centennial High School, has attended nearly every student event possible: from band concerts, to It’s Academic tournaments, art galleries, sports games, and Worldfest. She has devoted the majority of her time here to the students– their individual needs, requests, and ideas.

“The hard part was when a kid would say to me in the hallway, ‘Hey, can you come to this tonight?’ I kind of felt like I couldn’t say no… my job is to be here for you and serve you,” Dillon assured. “If there’s a kid who wants you to come, you’re there.”

The average high schooler, as Dillon has noticed, yearns for change. She is fascinated by Centennial’s students, who yearn for school inclusion, safety, and success.

Such student-driven change can only make for an exciting, yet overwhelming year. As principal, handling such drive can become a challenge.

With only seven hours in a school day, and an exponential number of people to oversee, Dillon recognizes the powerful position she holds, and how different it is from being principal of a middle school.

“I quickly figured out what I do, because there are twice as many of you, twice as many teachers, twice as many parents, but I still have the same 7-hour day,” said Dillon. “So when you guys come to my door, I’m stopping what I’m doing.”

Out of the plethora of memorable moments from the past school year, the ones that stuck out most to Dillon were the individual, intimate conversations with students. The most seemingly insignificant and trivial responses may last a lifetime.

Despite these incredible moments, not all moments have been positive. Such an intensive job can only come with extreme highs and lows, times in which school conflicts feel endless, and parking permits may never be resolved.

“Another thing I care about is equity,” said Dillon. “If we take the parking for example, we asked every high school in the county, what is your process, how do you issue permits?”

In the heights of such student, teacher, or parent frustration, Dillon must sit back and understand her place.

Upon walking through the expansive front doors of Centennial High School, Dillon immediately felt a wave of anxiety among the students. What formerly had been only warnings of the competitive nature became reality within an instant. Centennial’s high-achieving reputation does not exist without truth, as she discovered.  Students from ages 14 to 18 crowd the halls in discussion of their grades, SAT scores, AP test results, and anxieties.

“Certain students stress themselves out trying to achieve at such high levels that it’s emotionally unhealthy. I think a big part of this issue stems from students being reticent to talk about their stress.”

Dillon has appreciated every second she has spent in Centennial, learning and understanding the school’s community. Centennial, as she put it, is like no other. Especially different from that of middle schools, high schoolers possess an interest in the community’s well being. Often taken aback by the intensity of student passion, Dillon appreciates student conversation.

“All of a sudden, my primary target customers [students] are advocating for themselves, and coming to the door, whereas middle schoolers will very rarely seek you out.”

In Dillon’s past experience as a middle school principal of 12 years, she learned lessons she thought would be applicable to this new job, but soon realized otherwise. The most significant lessons, recalled Dillon, came from recognizing there was a lot to learn.

“A couple times this year I’ve made decisions like a middle school principal and not a high school principal… and didn’t go and say hey, this is what I’d like to see, how can we make it happen,” Dillon stated. “Once or twice I ruffled some feathers unintentionally.”

In just a year’s time, a lot has changed in Centennial. Most of all, it may be Dillon’s view of her position, and the students who make it possible. An experience many high schoolers can describe as the best of times, and the worst of times, is a year to remember- as Dillon’s legacy has only just begun.

Most importantly, to Dillon, of course, is her relationship with the students. “I think the role of the principal is to serve,” she says.

This article is featured in the 2019 Takeover Issue.  To see the full issue, Click Here!