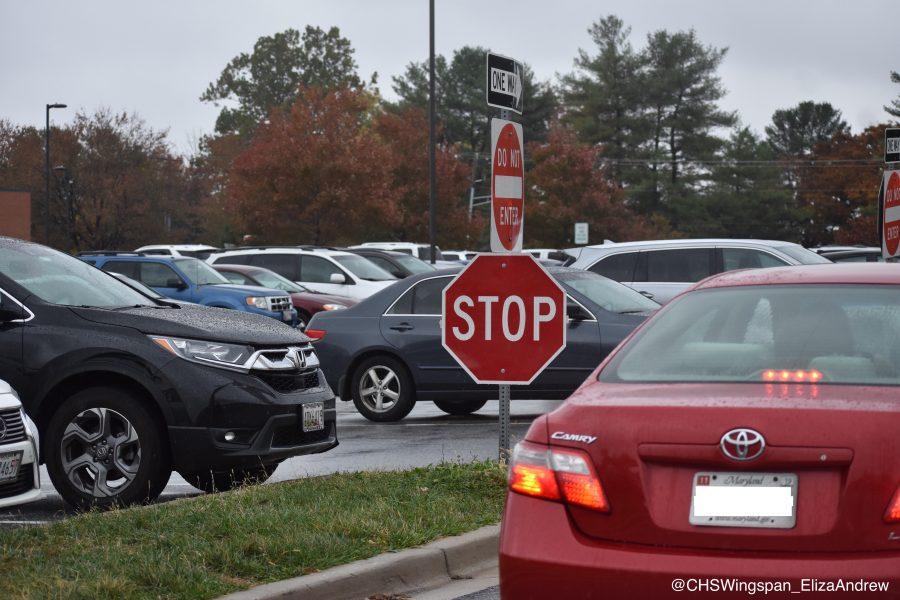 Words: Mariam Abd El-Shafy
Photos: Eliza Andrew
When students returned from summer break for the 2019-20 school year, there were some major changes made to Centennial’s parking lot.

Last school year, students without parking permits overcrowded the school’s lot. Parents dropping off their children were unfamiliar with the drop-off rules in the morning, which made it extremely difficult to park. The after-school rush of buses and students all leaving at the same time without adequate traffic rules caused the parking lot to break out into chaos daily.

Autumn Moore, a driving senior at Centennial, recounts, “there were always so many traffic jams, you couldn’t park. You couldn’t even exit the parking lot because there were so many cars.”

This year, the school has formalized processes in an attempt to make the parking lot safer. The school has established rules for dropping children off, differentiated between student and staff parking with paint-markings and signs, changed the pattern of the stop signs by adding two new ones and taking one away, and limited the amount of permits given to students.

“Last year, I got 12 anonymous letters in the mail from parents begging me to do something about the parking lot.” Principal Cynthia Dillon explains that these changes were necessary for the school to maintain a sense of safety.

“It’s not as hard to park in the mornings; there’s not as much confusion.”

However, some parents have a different outlook on these new changes. “Things are slow now,” Balpreet Bhamra, a Centennial parent, claims, and “no different than before,” in terms of student safety.

Some parents, like Jonathan Davis, have the complete opposite view. “If a parent drops off earlier instead of waiting until they are near the gym, they can exit more quickly. The crossing guard is a vital part of the new system,” says Davis. “With everyone dropping off along the curb it’s safer!”

Davis, however, does see room for even more improvement. “To be even safer, I wonder if they could actually pave along the curb all the way up to the tennis courts since that is where you are asking us to drop off our kids. I’m worried that when it’s snowy, wet, no one will want to get out and walk on the dirt path.”

“I see what the stop signs… were intended for, and I believe that something needed to change,” she says.

However, Pantoulis does not believe these changes have been for the better.

“It’s really scary and confusing, and everyone who parks around me has expressed frustration. Many students in a rush will speed out in front of other cars,” says Pantoulis. “I think [the parking lot] has become even more chaotic.”

Before the school year, many school departments, such as administration and building services, held a meeting in order to address the dangers of the lot. Cameron Rahnama, assistant principal of Centennial, explains the process of establishing these changes. “We involved all of the responsible parties that we could think of to have out there, so when we developed what we were going to do, it was a joint effort, it wasn’t just Mrs. Dillon and [me].”

Administration admits one of the negative side effects of the changes is parents dropping off their children in random places across Centennial Lane. “It’s really not safe,” Dillon says. “This is not about ruining someone’s day or year by not giving them a permit or by forcing them to drop kids off on the right side of the road; it’s about keeping kids safe, and when parents or students don’t follow the rules, it makes it harder to do our job, keeping people safe.”