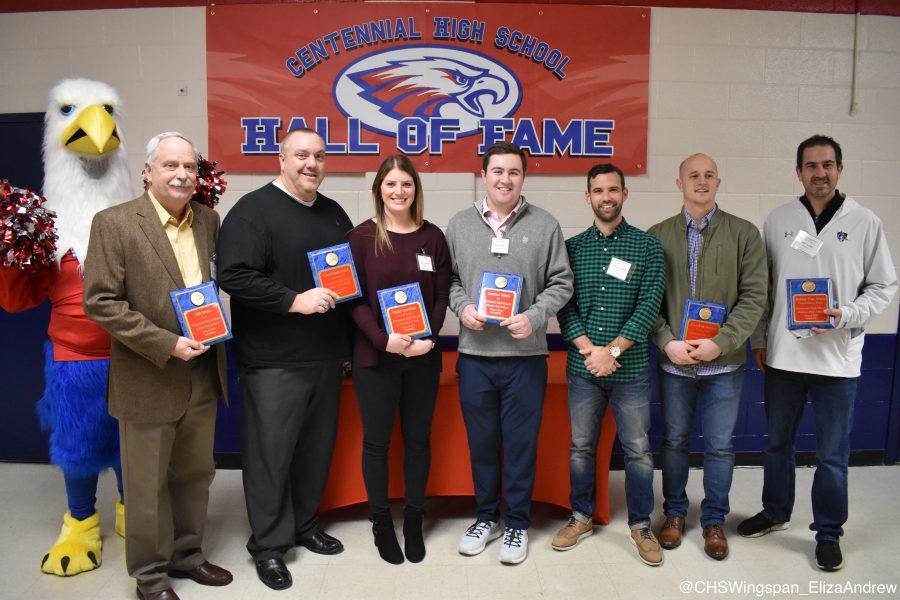 Words: Shawn Kruhm
Photos: Eliza Andrew
On Friday, February 7, Centennial High School recognized five athletes and two coaches for their accomplishments in sports. The hall of fame class of 2020 included student athletes Caitlin Burr, Connor Flach, Molly Speicher, Jonathan Stumpf, Anthony Tinnirella, and coaches Chad Hollwedel and Bill Stara. Along with the seven new inductees, Centennial honored Bobby Van Allen, a member of the 2018 class, as he could not make it to the induction in previous years.

The class is nominated by athletic coaches at Centennial and then further considered by a higher committee.

The hall of fame ceremony was held in the gym following the girls’ Varsity basketball game, and just prior to the boys’ game.

Due to his astonishing coaching career and the countless relationships he has created with students while teaching at Centennial, Hollwedel received an overwhelming response from the audience.

“It certainly means a lot to me,” said Hollwedel. “If you look at the other coaches and the level of just this class alone, this class was a very accomplished class.”

Hollwedel coached at Centennial for over two decades. He coached football for 14 years and basketball for a whopping 22 years. He specialized in the offensive line and was part of the 2006 coaching staff that won a school-high record of eight games.

“For me, I think I have always tried to do things with the interest of the community in mind,” said Hollwedel. “With that said, I think it’s a very nice recognition for the time and energy put into that.”