Native American Cultures and Traditions During A Pandemic

The COVID-19 pandemic has disrupted many Native American communities. Due to this, many have been struggling to preserve their culture during these unprecedented times. 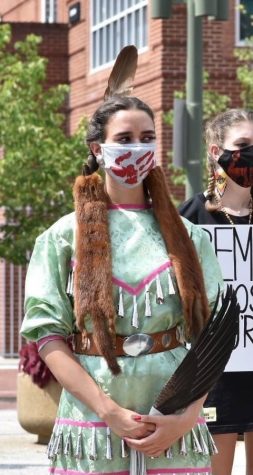 Kayla Moore, a recent graduate of Centennial High School, is from a North Carolinian recognized tribe named Lumbee. She is also one of the founders of the Native American Student Union (NASU) club at Centennial.

“It is really hard during the pandemic because Pow wows are obviously not being held, which is kind of our biggest community resource,” stated Moore. “Lumbees from all across America will come home and will host a big Pow wow.”

Pow wows are a huge cultural gathering in the Native American community with dancing and other festivities. They are also another opportunity to gather with friends and relatives. “You dance, you eat, you buy from the vendors that are there. It’s a social gathering,” said Moore.  Skilled Native artisans often attend Pow wows to display and sell their handmade goods.

Moore spoke on some of the other ways she preserves her culture and traditions during the pandemic; “I dance at home. I still practice. I still advocate for Native American rights and everything from home. It’s been really hard not being able to see everyone but I still try to keep connected with family.”

Due to COVID-19, it is hard for Native Americans to host Pow wows or any other gatherings because of CDC regulations; however, Native Americans are reconnecting through the use of technology to help keep their traditions and languages alive.

Donating to local tribes near you also helps Native Americans. Moore mentioned that “[she knows] a lot of tribes don’t really have clean water,” so any donations would help.

“The biggest thing you can do is listen to Natives. I understand that if you live somewhere like Maryland, Native Americans are not something that you come across too often as you would in somewhere like Mexico or Ontario,” expressed Moore. “If you are familiar with someone who is Native American, you can always ask them, ‘how can I be a better ally to your culture?’”