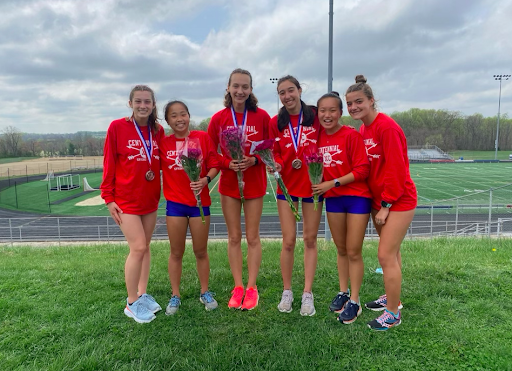 “We worked hard all season to get the results we wanted, and they came,” stated LasCasas. “A big part of being a successful team is how well everyone connects, and I think we have done a good job building bonds between all the runners and coaches.”

In the girls’ race, Ella Harris, another senior at Oakland Mills, placed first with a time of 18:58. Centennial seniors Katerina Talanova and Michelle Weaver finished in fourth and seventh place, with Talanova clocking in a time of 19:16 and Weaver crossing the line at 19:25. Juniors Amaya Cunningham and Madelyn Mielke placed 14th and 15th respectively with senior Alexis Yim placing 30th to round out Centennial’s top five.

“We executed our plan perfectly and made the best out of a muddy day,” Talanova exclaimed. In regards to girls’ coach Kevin McCoy, Talanova added, “he is super passionate and I know the team will continue to be great!”

Howard High School managed to win the race by a large margin, but Centennial had no real competition for second place, with Atholton finishing very far behind despite their third place finish.