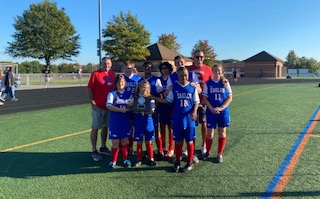 The Centennial Allied Soccer team are county champions as of October 21. This is their second consecutive championship, with the last being in 2019 due to COVID-19.

During the regular season, the team went undefeated with a 6-0 record. Because of this, the team was the number one seed going into the playoffs, which was called the “Pumpkin Bowl.” The top six teams in the division played at Marriotts Ridge. The team’s high seeding put them at an advantage during their games. “We knew if we tied or beat River Hill we would win the county championship because we didn’t have one loss going into it,” stated head coach Edward Fowler.

Centennial started off in a very competitive game against Atholton ending in a 0-0 tie. They then played Marriotts Ridge and won 3-1. Finally the big game was against River Hill, ending in a 0-0 tie and the title of county champions. Noted was a key save from senior goalie Regan Malaisamy at the end of the game.

Senior Sean Burns was excited to win his first county title. “It’s amazing. It’s the first time I’ve ever won a county championship or anything that was big.” The team played hard throughout the season and the win didn’t come easy. “Being defense, I learned how to be a little more aggressive and eventually learned how to get the hang of it,” stated Cohen. The tough games made for a more rewarding win.

The team still had one more game to play against Mount Hebron to finish off the Pumpkin Cup. With a win of 4-1, it was the icing on the cake.

To prepare for the Pumpkin Cup, the team held as many practices as possible. “Coming off COVID we couldn’t practice as much as we wanted to and recruit. Some of the kids didn’t want to play,” mentioned Fowler. However, the kids that did choose to play became really close throughout the season and developed teamwork skills.

“It’s a good bunch of kids. They all get along very well, they have a lot of fun whether it be at practice or games” added Fowler.

“I like how soccer is a team so we all won together,” stated Cohen. From a skills standpoint she added, “I learned not to use my toe, but the edge of my feet to kick.

When asked what he learned from being on the team, Burns mentioned “how much fun soccer is.” This goes to show the enthusiasm and pride the team has towards their big season and monumental win.