The State of the Union: Mr. Riddler’s Superbowl 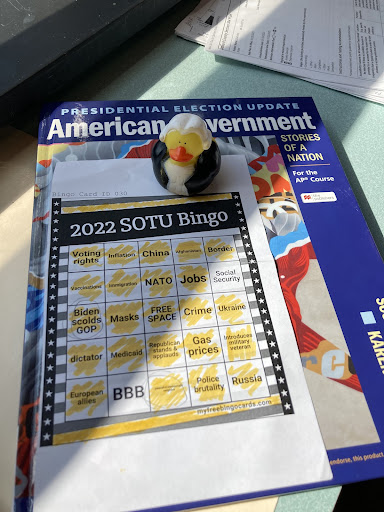 A staple of the American government, the annual State of the Union Address, is one of AP government teacher David Riddler’s favorite parts of the school year. “It’s an opportunity to bring together a lot of different concepts that we’ve talked about in class,” he stated. He’s able to time his units about the executive branch and powers well enough so that his students are able to see the executive powers in action.

This particular State of the Union Address covered a wide range of topics, such as the effect of COVID-19 on both the economy along with personal impacts, as well as inflation and heavier topics such as the ongoing war between Russia and Ukraine.

Riddler lets students voice their opinions on current events in class, such as with the State of the Union, where he allowed students to list what they thought the president would mention and why, as well as contributing to long conversations about other current events. Riddler promotes a judgment-free debate space where students can feel comfortable and heard speaking their minds, and allows students the opportunities to get more involved in their local community and politics.

Specifically, for the State of the Union, Riddler gave out “State of the Union Bingo,” which included topics that many people thought President Biden would address and it’s complete with a founding father themed rubber duck as a prize.

“I don’t really think it’s the Superbowl,” said Riddler, “But there’s a lot of fun stuff I can incorporate into my classes with it.”