The Centennial Varsity Girls’ soccer team lost their second in-county game of the season after a close 1-0 match versus River Hill High School on Tuesday, October 15.

In the first half, it was a back-and-forth game and both teams had many scoring chances. It was not until 5:24 left in the half when River Hill scored the first goal of the game.

With eight seconds remaining in the first half, Centennial was awarded a penalty kick, but the River Hill goalie made a crucial save to keep the Eagles scoreless.

The Eagles offense generated many opportunities throughout the second half, but were unable to finish. In the end, River Hill held on to their 1-0 lead and won the game. 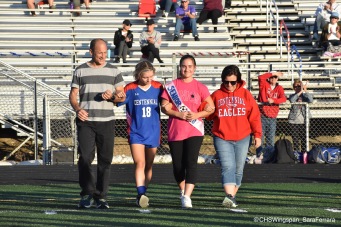