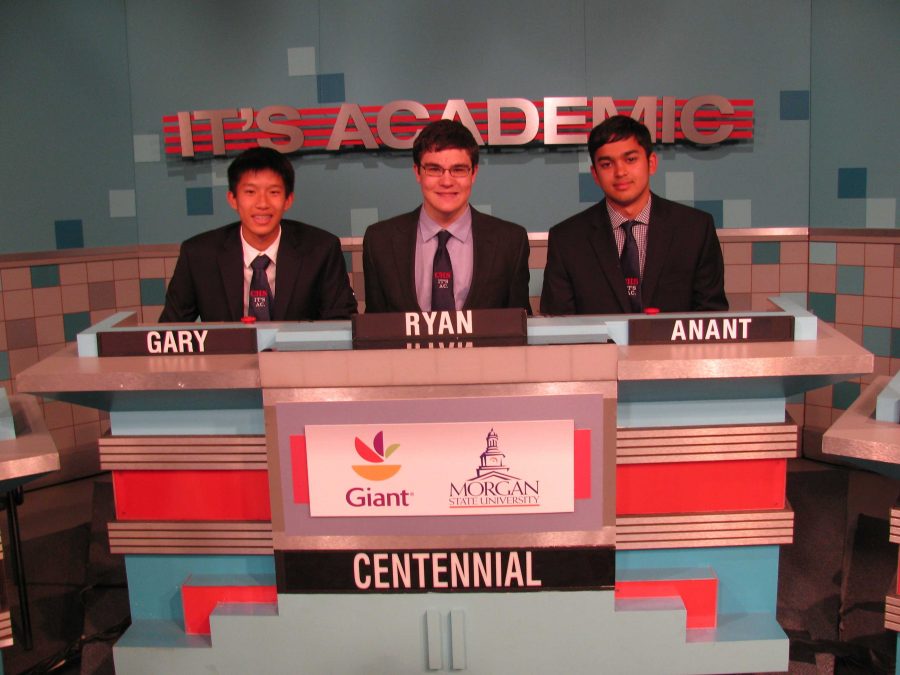 Words: Amanda Ali
It’s Academic is back at it again, starting off at the top of the competition. On Saturday, September 27, Centennial’s 2014-2015 It’s Academic team dominated their first match on the It’s Academic TV Show at WJZ TV studios. Centennial defeated Atholton and Thomas Johnson with a final score greater than the scores of the other two teams combined.  They showed a perfect performance as the team answered every competitive question and directed question and ended with no incorrect responses given throughout the entire show.

The team is filled with extremely dedicated and intellectual individuals that showcase their skills through their competitions. The three teammates that represented Centennial in the competition were senior captain Ryan Heslin, senior Anant Mishra, and junior Gary Tse. Heslin previously won the TV championship of the Baltimore metropolitan region when he was a sophomore at Centennial. “I am very proud of how hard Ryan, Anant, and Gary worked to become such a brilliant and cohesive team,” said team advisor Dr. Eric Seifter. This was Heslin’s ninth TV taping for Centennial’s It’s Academic team, Mishra’s fourth TV taping, and Tse’s very first TV taping.

The It’s Academic Club consists of 55 members. Four to six teams composed of four students each are chosen and sent to numerous weekend quiz bowl tournaments throughout the entire school year. Not only are the teammates dedicated enough to devote much of their time to this team, but they also continue to practice their skills in order to consistently rise on the path to success. Centennial’s team has won the Baltimore TV It’s Academic championship a total of five times in the past eleven years of competing. These students are able to broadcast their intelligence during these competitions, and it does not go unnoticed.

Centennial’s It’s Academic Club and Team practice every Tuesday after school for about three hours. Throughout the year, they never seem to stop their dedication to the team and even go above and beyond to volunteer at Burleigh Manor Middle School in order to train their middle school team.

On November 9, Centennial will be hosting 72 teams from Maryland, Washington DC, Delaware, Pennsylvania, and Virginia. This is the team’s biggest fundraiser of the year, and many club members, parents, and NHS students help to make sure the event is a success.

“I want the students to experience the success that comes from hard work, dedication, team-building, and a culture of excellence and consistent playing,” said Seifter, “Most importantly, we stress good sportsmanship, fair play, and comradery during the competitions.”

If the team continues to excel like they did this past Saturday, they will continue to achieve great success in their future. The next TV taping competition will be on February 28. Don’t forget to catch the airing of the competition on WJZ Channel 13 on November 15 and the next day online at WJZ.com. We all hope to see Centennial’s It’s Academic team continue to succeed in their many competitions to come!