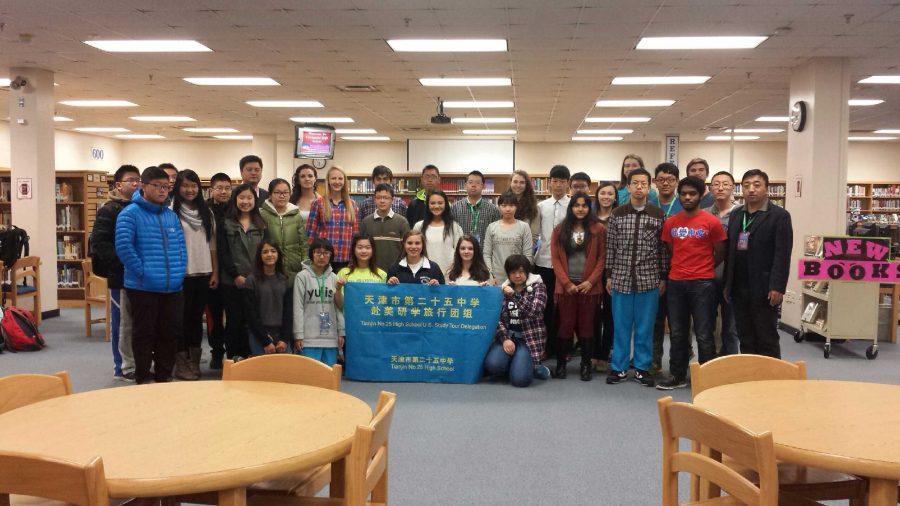 Those 25 weren’t just randomly picked. All the students in Tianjin 25th Middle School, whose first years are equivalent to an American sophomore, were given two tests. Once the results came out, the 25 students that scored the highest were given the opportunity to travel to America (in Chinese, America is pronounced Měiguó) and learn in American schools for three days. Because the test was administered to evaluate a broad range of subjects, many of the top students may excel at math or science but may not be as strong in English. It was a common struggle for the 16 students, and even harder if the CHS students they were shadowing didn’t speak fluent Chinese.

One student, Wang Xin Yu, said the hardest thing for him was “speaking. It was hard to communicate. But, I have learned more English already.”

Most of the students had many of the same feelings towards the common cultural practices here, though each of them seemed to have his or her own favorite part of America. One student, Li Xiao Zheng, stated that his favorite thing was the American people. “They’re really nice here,” he said.

“I really like the cafeteria,” said Gao Jin Sheng. “The food here is good!”

The CHS students being shadowed also got to experience a lot culturally. “I was really nervous at first because I was sure I would embarrass myself with my Chinese,” said junior Tess Hawkins. “But we ended up getting along really well,” she said about her and her shadow, Li Hao.

Brian Reed said, “It was nice showing [Jun Ran] around the school. It was fun learning more Chinese from him and I realized that the things that we take for granted sometimes they don’t have. So it’s really been interesting.”

There were also many students from CHS whose families were hosting a few of the students. Teresa Whittemore, Ryan Sorak, and Abby Pavuk were some of those students.

She continued with, “I’d always wanted to be a host to an exchange student so when my mom got an email and asked if we wanted to host, I immediately said yes.”

All in all, this program has turned out to be a success for both CHS and Tianjin 25th Middle School. Hopefully, in the future, Centennial will be able to participate in more programs like it.