A Day of Celebration for the Lady Eagles 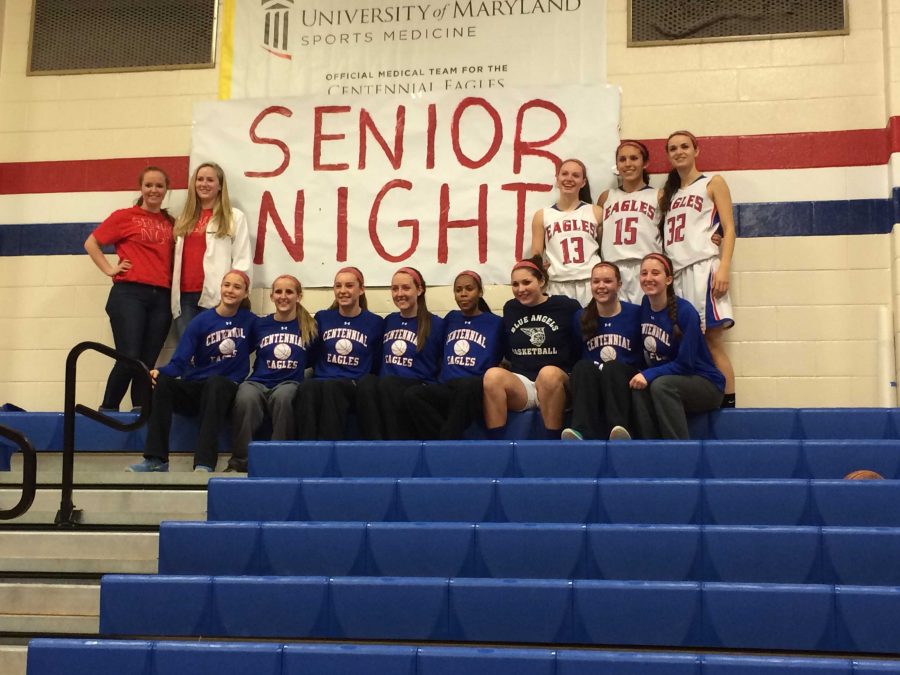 Words and Photos: Giana Han
Feb. 20, 2015 was a day full of celebration for Centennial’s girls’ basketball team; they not only earned a convincing win, but they also celebrated Senior Night in addition to the moment when senior Anna Mitchell scored her 1000th point of her high school career.

After the tip off, Marriotts Ridge quickly scored the first two points of the game.  However, this would be the only time they held the lead in the game.  The combined effort of Mitchell and freshman Kelly Simmons on the offensive and defensive boards quickly put Centennial up. The Eagles were off, and they never looked back.

The first quarter was dominated by Mitchell who led the team in every aspect of the game.  The Mustang’s defense could not stop her as she breezed by through the paint, dropping lay-ups and sinking foul shots.  By the end of the quarter, Mitchell had already accumulated three rebounds, four steals, a block, and an overwhelming 16 points that helped put the team up 23-5.  However, she was still 10 points away from her goal.

The Eagles continued to dominate through the second quarter with the aid of seniors Kimmy Eads and Jordan Burk who contributed with baskets, boards, and steals.  They finished out the half with a score of 44-8.

After a performance by the Drill team for the half time show, the Eagles came out to continue their excellent play.  Players were constantly rotated off the bench, and everyone hit the court, but Mitchell was left in to keep playing.

This game presented Mitchell with the opportunity to reach 1000 points, but she continued to pass the ball, giving other players the chance to score as well.  However, just points away from hitting 1000, Mitchell came down wrong on her ankle, and had to be taken out of the game.  But Mitchell was determined to make it back in and reach her goal.

“I just told myself I was going to be okay, and I would find a way to get back out there,” said Mitchell.  That quarter she was able to resume playing, and, with seven seconds left in the third quarter, she finally scored the final two points that brought her tally up to 1000.  A time out was immediately called as the gym erupted in cheering.

“It’s definitely a huge accomplishment,” said Mitchell.  “I know no one has gotten it in a long time at Centennial, and it’s good to represent my school.”

The quarter ended at a score of 61-10, and the seniors were retired from the game after a strong performance from all three.

The underclassmen took to the floor and secured the win with a final score of 67-21.  Every team member played a part in the win.  Eight players put points on the board, including Mitchell (28), Simmons (8), Eads (7), Burk (7), and Izzie Chausse (7) among others.  Those who did not score still contributed with rebounds and steals, creating an impressive effort by the entire team.

Mitchell summed up the success of the game, saying, “I couldn’t have done it without my awesome teammates.  They were great tonight; they understood my goal and helped me every step of the way.  It was a much needed win after our loss yesterday.  It feels great to come back with a big win, especially on Senior Night.”

From here, the Eagle’s basketball program will be heading to play-offs.  The girls will play on Friday, February 27, so come out and support the team!