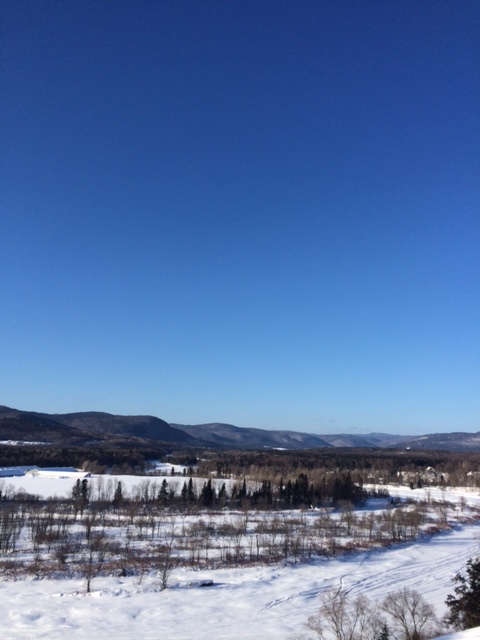 Words and Photos: Sandy Eichhorn
Early on Wednesday, Feb. 11, 45 Howard County high school students and five teachers left for a six-day trip to Québec City. On this trip, students would learn about the culture of the French-Canadians while practicing their French in real world situations. These kids were French 3-5 students from Centennial, River Hill, Howard, and Marriotts Ridge High Schools.

Their days were spent in the city as well as participating in an interactive history activity and touring St. Anne’s Basilica. The students also traveled to a sugar shack, went dog sledding, tubed at the largest park in North America, saw a waterfall, toured the Ice Hotel, and went snowshoeing through the woods. The group was taken on tours through museums and the city, and they were also given time to explore in groups to buy souvenirs and try out local restaurants.

Students learned about the war between the French and British and saw a demonstration of loading and cleaning canons that were used in the war. The group was able to participate in Canadian activities like making maple butter and taffy at the sugar shack as well as guiding sled dogs and holding puppies.

They ate at Les Anciens Canadiens, the oldest building in all of Québec, and were allowed time to go and explore other restaurants in small groups. The well below zero temperature did not deter their enthusiasm when they participated in a cultural Huron Native American dance and tubed down the fast and bumpy slopes at Village des Sports.

While visiting the Montmorency Falls, the group walked over a suspended bridge and enjoyed the stunning views of Québec City and the frozen St. Lawrence River. Students marveled at the spectacular ice carvings in the Hôtel de Glace (Ice Hotel) and enjoyed the ice slide as well as the hotel’s themed suites.

The group was taken to St. Anne’s Basilica and learned about the miracles that happened there. They were allowed to explore the church and take in the breathtaking architecture and paintings. One night, the students went on a guided snowshoeing tour through the woods and ate chocolate fondue next to igloos and campfires.

On Monday, Feb. 16, the students left their hotel, Hôtel Plaza, at 6:00 a.m. to beat the snowstorm heading towards Maryland and returned home at 8:45 pm.