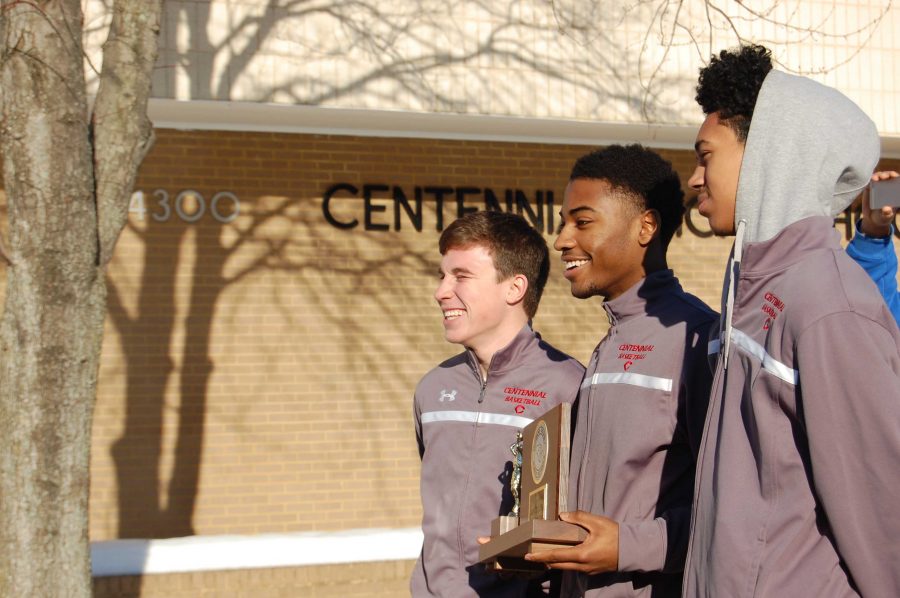 Words: Giana Han
Photos: Izzie Chausse
Contributions from Sandy Eichhorn and Sabrina Han
After three years, Centennial can once again claim to be home of the boys’ basketball county champions.

On Feb. 20, the Eagles beat Marriotts Ridge 60-29 which cinched the 2015 county title for the first time since the 2011-2012 season.  The game was away, so the accomplishment was not celebrated in the same way it would have been if it had occurred at home.  To remedy this, the varsity team was called down during second period for a special ceremony.

The team, coaches, and managers gathered in the cafeteria along with the administrators where Centennial’s athletic director, Jean Vanderpool, presented them with the flag and trophy.

Before handing over the trophy, Vanderpool said, “You will be able to come back here forever and look up at the red banner in the gym and see it says 2015 boys’ county champions.”

Following the speeches and pictures, the team went outside to watch the captains raise the county championship flag before they celebrated with a breakfast.

“Freshmen year, I never thought we’d get here, looking at all of us,” said senior captain Chad Strothers. “But, as we developed each year, I could see us getting closer.” According to Strothers, seeing the varsity team named champions his freshman year was a motivation.

“It looked like such a great feeling,” he said.  “I wanted to get there.”

Senior Isaiah White had been working towards this goal as well.  Each year, he was given the chance to play for other teams at other schools, but each year, he decided to stick with the Centennial program.

Gaining the county title was part of the goal that the team set at the beginning of the year, but the process in getting it was a long one.

“We grinded each day in practice, we always worked hard,” said senior Connor Clemens.  “In the offseason, we’d shoot baskets in the gym, and we played fall, spring, and summer leagues.”

Coach Chad Hollwedel agreed that the players had worked hard through off-seasons, and he also said, “A lot of different things have to go right.  We were fortunate to stay healthy this season, but a lot of different people stepped up during different parts of the season.  It’s not just one or two or three or four people; it’s 12 people on the floor that made the difference.”

He added that the loss to Oakland Mills turned out to be an advantage.

“It helped tremendously during the season to help prepare us to deal with tight games and adversity.  It prepared us to compete in the next part of the season,” said Hollwedel.  The game was the closest game of the year for the Eagles, and Hollwedel hopes it will prepare them for the atmosphere of the play-offs.  However, even though it resulted in a loss, he and the other coaches are still proud of their record of 18-1.

As senior Eli Geist said, “It’s a good reward for all the hard work everyone does, not just us.”

“It doesn’t matter what role people play on the team, whether it’s being out on the court and playing or being on the bench and picking each other up, everyone is there for each other,” said Strothers.

“To be able to have this experience as a group after all the years of work, they get to see a reward” said Hollwedel.  “Chad and Isaiah were huge this year.  For the three who didn’t play much last year, it’s a great reward for me to see them play a different role with the success they’re having.”

Senior Kevin Wilson is one of those three seniors.  He said, “It’s really important to me because last year, as a junior, I didn’t see the court much.  This year, I’m contributing [tremendously, added White]. We’re the backbone of the team.”

The seniors have played an integral role on the team this year.  Wilson has been mentioned repeatedly for his solid defense, especially at the Oakland Mills game when he had to guard Mamadou Ndiaye.  Geist was hurt at the start of the season, but since his return, he has been all over the boards.  Clemens has been known to sink clutch shots, and of course, Strothers and White are some of the leading scorers in the county.

However, the race does not stop with the county championship title.  The Eagles are scheduled to play the winner of the Poly-Long Reach match up on March 3.

“We’re fortunate in that for every game we win, we are guaranteed a game here [at Centennial].  We put ourselves in a good spot,” said Hollwedel.  “Of course, our goal is to play the last game of the season.”