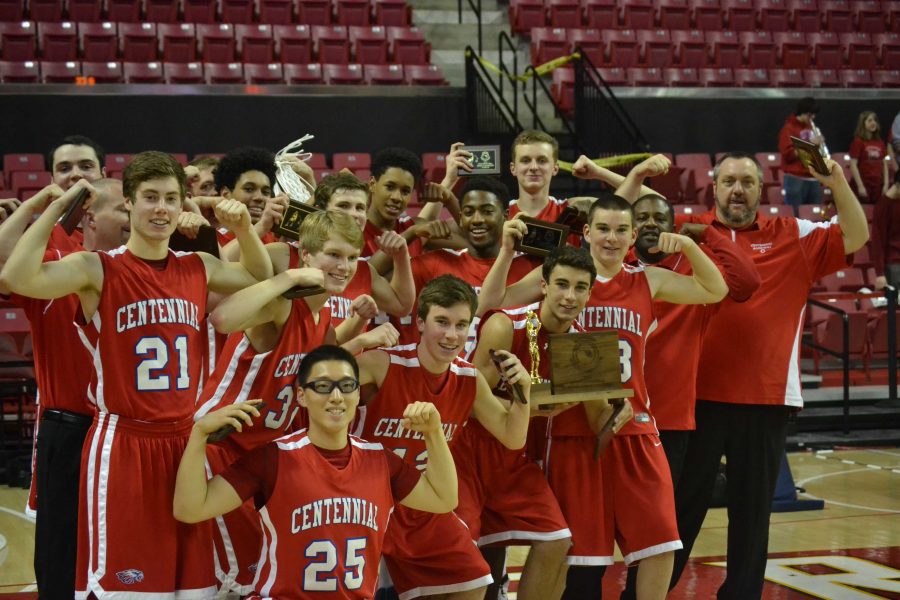 Words: Mike Moore
With what seemed to be the entire student body on hand and wearing red, the Centennial boys’ basketball team took the floor for their class 3A state title game against Westlake High School. An entire section of the arena was filled with Centennial pride, and it lifted the team to their first ever state title.

“All year long, defense has started it for us and it was no different today,” Hollwedel said during the post game press conference. It was tied 9-9 after one, with Brown and senior Isaiah White leading the offensive push.

The second quarter began with senior Eli Giest giving the Eagles the lead 29 seconds in. White came up with two key blocks in the second, and senior Kevin Wilson was playing stellar defense in the second, but Westlake built a five point lead.

However, that 16-11 lead was short lived. Sophomore Elijah White threw down a dunk that ignited the enormous Centennial crowd. Shortly after, the game was tied when Isaiah White converted a three point play to tie things up. About a minute later, I. White went coast to coast for an easy lay in to push the Eagles ahead.

Another three point play by senior Chad Strothers gave the Eagles a five point lead. A three point bucket by I. White gave the Eagles a 24-20 lead going into the locker room. The stage was set for one last half of basketball for the teams, both of whom were looking to find an edge in the second half.

The second half started off a bit rocky for the Eagles. An early turnover gave Westlake a basket that brought their lead to two. Westlake was also clogging up the passing lanes of the Eagles, making it difficult to move the ball. Another three point jumper from I. White gave the Eagles a four point lead.

Westlake hit another shot and then a three pointer to give them a one point lead, which was washed away by an E. White three ball, and Centennial was up again 30-28. Brown finished a layup with just under three minutes to go in the quarter to extend the lead. A three point play by E. White and a bucket from Giest rounded out the third quarter scoring, and Centennial was up 37-34 after three quarters.

The fourth quarter was one Centennial fans and players alike will remember for years to come. Strothers recorded six straight points for Centennial, shifting the mood of the game for both teams. An 8-0 run, concluded by a smooth jumper from I. White gave the Eagles a lead they would hold onto.

Strothers continued his prolific quarter by converting yet another three point play to extend the lead to 48-35. As time began to wind down, the players and coaches started to sense what they were about to accomplish. With an amazing crowd on hand to support them and a comfortable double digit lead, the crowd began to make even more noise as they began the celebration. A dunk by I. White made it clear that the game belonged to the Eagles. Junior Michael Merkey hit two free throws that sealed the deal, and Elijah White put icing on the cake with a second dunk with just over a minute left.

Once that clock hit all zeros the Xfinity Center erupted. The joy on the faces of the players, coaches and fans was remarkable. The team had brought this community together, and now, they could celebrate this great accomplishment as one.

Brothers Elijah and Isaiah White have had a unique experience throughout the season, being able to take the court together as a sophomore and senior respectively, and that has meant a lot to them. Isaiah explained how even though there’s a whole team out there, it’s different playing with his brother.

Senior Kevin Wilson has been the anchor of the defense all season for the Eagles. Every night he has blanketed the other team’s best player and Hollwedel gives him a lot of credit for the team being where they are today.

“There is zero chance that we’re sitting here without Kevin Wilson’s defensive efforts this year, no chance at all […] Kevin is an absolute warrior and he’s a special player.  He sacrifices himself every game for the good of us, and I’m so proud of him,” Hollwedel explained.

This team is special for Hollwedel. “I’m actually sad that this is the last time I get to coach this group. I wish we could keep going somehow because I don’t want it to end,” he said.

The 2014-15 season has been a special year for this team. The community has rallied around the team and the team has fed off the support fans show both during the games and outside of the games. The team has brought an entire school together, putting people who may not have been friends together as they celebrated the success of fellow classmates. The basketball team won the game, but in the grand scheme of things, it was the students and parents of Centennial High School that might’ve earned the greater victory this Saturday March 14, 2015.