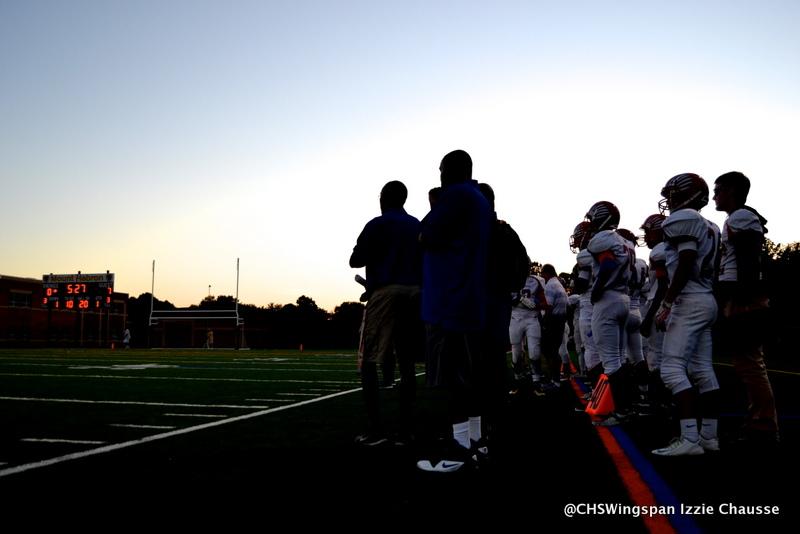 Photos: Izzie Chausse
Words: Michael Moore
On Friday, September 11, the Centennial football team traveled north of Rt. 40 to take on rival Mount Hebron in one of the most anticipated games of the year.

The first quarter was tied at zero until an interception deep in Mount Hebron territory gave the Eagles great field position. A few plays later, junior quarterback Matt Shoenberger found senior Kyle Taylor for the first touchdown of the game. The Eagles’ sideline blew up and the crowd was given new life.

In the second quarter, the Eagles held onto their lead as long as they could, but Mount Hebron found the end zone with a little under eight minutes left in the half.

The game was tied until the Eagles defense made a great play deep in their own territory and pinned Hebron back near their goal line. On the ensuing punt, the Eagles blocked the ball, and recovered it in the end zone for the leading touchdown.

The extra point snap was too high for the holder and the Eagles walked into halftime leading 13-7.

The second half started with Hebron receiving the ball. The Eagles made a defensive stand but couldn’t get the ball into the end zone during their next possession. Hebron ended up finding the end zone and they took a one point lead going into the final quarter.

In the fourth quarter, the Eagles suffered a major loss. Shoenberger was leaving the pocket when he was tackled hard from behind. He was taken to the sideline, and left the game with a broken collarbone.

So, it was left to quarterbacks Cameron Neilon, a senior, and Michael Klein, a junior. Klein came in late to the game and tried to get the offense to generate plays. However, the Vikings made a stand and escaped with a one point win.

Seniors David Phelps, Miguel Almeida, Austin Kraisser, and Brian Johnson all played very well and gave it their all. Junior Mason Smith also played a nice game for the Eagles. Their next game is against Oakland Mills on September 18 at home.