Dancing the Night Away 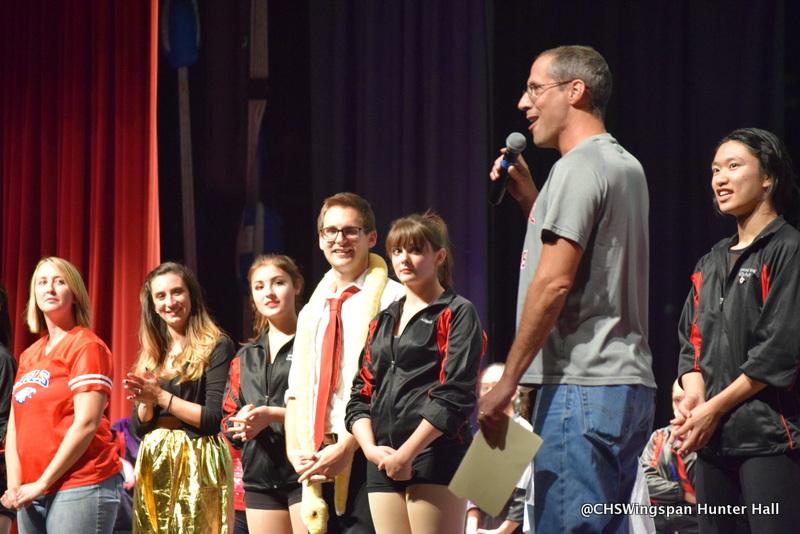 The annual Dancing with the Staff was held in the Centennial Auditorium this past Tuesday. The dance teacher, Rebecca Clark, put on the entire show, and Steven Doff was the MC for the night. Very important judges showed up to chose which team they believed was the best, and therefore, the “judges choice.” The audience also had their chance to vote for their favorite team(s), establishing a first, second, third, and fourth place.

Lee and Fleegal kicked off the night with a dance to Fall Out Boy’s new song, Immortals, in personalized diamond tee shirts reading “Immortal.” J. Lee and Leung took the stage next with a “fresh” routine to a hip-hop mash-up. Their classic white tee’s and red snapbacks provided them with a great look for their routine. Principle Hafets became “one of the kids” for a night with Pomeranz’s routine to the popular pop song, Shut Up and Dance. Next up were Whittemore and Pasciullo with an upbeat routine that plastered a smile on every audience members face.

Dwyer and Reynolds shook up the competition with an original tap routine to a music mash-up where both Reynolds and Dwyer did a full split, ouch! Wang and Ward made the auditorium bounce with the longest performance of the night. Their hip-hop mash-up made the audience laugh, clap, and cheer as loud as they could, especially when they “whipped” and “nae nae” to the popular song Watch Me. Nussbaum and Engle followed with a dance to Worth It. Engle made a mistake in the beginning of the dance, but made up for it by hitting every other move. Brock and Grimm switched it up with a routine where they did the wave, as well as robotic moves.

Kim and Cleveland hit the mark with their performance to Ghost Town. Their dance brought the competition to a new level with difficult moves and a faster pace. Nagy and Hammers shinned bright on stage in their gold pants during their performance to Can’t Touch This. Lewis and Brown made the crowd cheer for their perfectly in-sync splits and back flips, as well as when they “hit the quan”. Xu and Liu touched the audience with their classic fan dance with beautiful red and yellow fans.

Zhang and Carlsen were in-sync through their entire routine to Dear Future Husband by the popular pop artist, Meghan Trainor. O’Brien and O’Brien, known as Team O’Brien, owned the stage in their Team O’Brien shirts and sparkling gold hats during their dance to Classic. Pavuk and Matchim performed a creative, show-stopping performance to a Britney Spears song mash-up. Reid and Dorsey performed a hip-hop routine where they “hit the whip” and received much praise. Mori and Fisher finished the night with a difficult routine with hat flips and cartwheels that ended with personalized shirts that read “No Treble.”

After a brief intermission where audience members and judges voted for their favorite team, a decision was reached. After a performance by only Senior Dance Company and another with the staff members, results were revealed. Third runner up was Nagy and Hammers; second runner up was Dwyer and Reynolds; first runner up was Mori and Fisher. The Judge’s Choice award went to Pavuk and Matchim, and the 1st Place trophy went to Wang and Ward!