Centennial Hockey Defeats the WHO in Senior Night Game 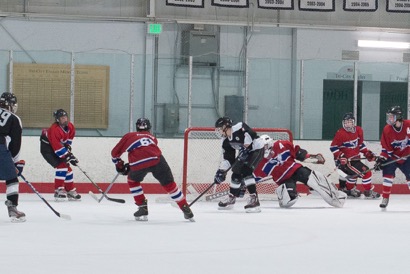 Words: Sandy Eichhorn
Photos: Centennial Hockey Club
Centennial’s Hockey Club faced-off against The WHO on Friday, January 8, 2016 for their senior night. The WHO is a combo team with players from Wilde Lake, Hammond, and Oakland Mills.

Sophomore Michael Hughes scored one goal for the Eagles in the first period, which ended with the Eagles trailing the WHO 1-2.

The Eagles scored four goals in the second period, two from Hughes, one from sophomore Nicholas Priester, and the other from sophomore Franklin Yang. Though the team was able to score four goals, the WHO still dominated the game 5-6.

The Eagles came out hard in the third period and quickly took the lead after Priester scored a goal. Hughes was able to score two additional goals, putting the Eagles ahead of the WHO. The Eagles won the game 8-7. The hockey team will be playing at the Laurel Garden’s Ice House against Glenelg on Tuesday, January 12.