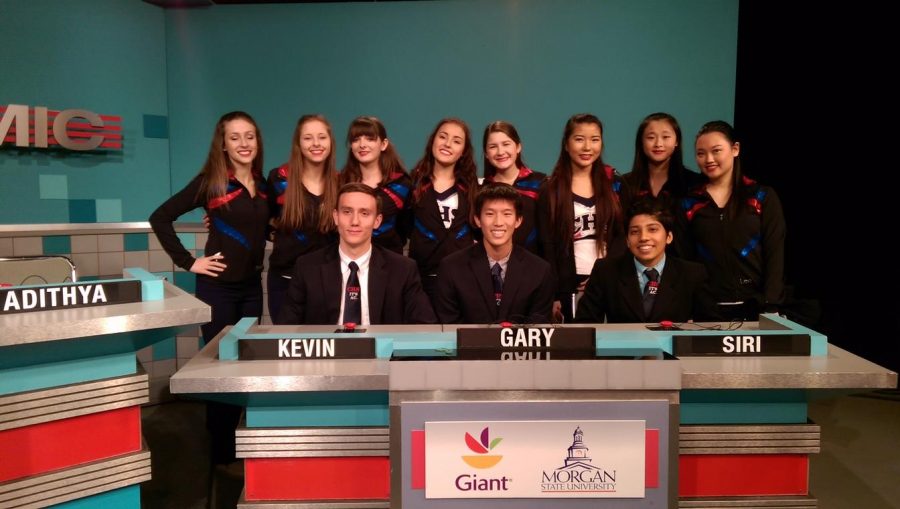 Photos Contributed By: It's Academic

Words: Sandy Eichhorn
On Saturday, February 6, Centennial’s It’s Academic TV Team, composed of senior captain Gary Tse, senior Kevin Costello, and junior Siri Neerchal, defeated Hereford and Reservoir High Schools 675 to 385 to 260 respectively. The air date of the competition will most likely be at the end of April. The competition started with 81 teams and has been narrowed down to 9 teams for the semifinals. This will be taped along with the finals on April 30 at WJZ TV studios. It’s Academic is the defending champion of the Baltimore Metro and the TV Superbowl against DC and Virginia.

The It’s Academic Team thanks the Drill Team for going to the competition as well as Assistant Principal Jim Zehe for attending (when you watch the taping, please pay special attention to how he is introduced by Gary). The team was also supported by the  Centennial Lane Elementary It’s Academic Team and the Burleigh Manor It’s Academic team at the taping.

Centennial’s Quiz Bowl Team comprised of seniors Gary Tse, and Kevin Costello, and  juniors Siri Neerchal and Jason Li,  is now ranked 16th in the nation and our school has qualified 3 teams for the premier national championship competition in Dallas, Texas over Memorial Day Weekend. Centennial will host the State Championships for History Bowl on March 12 and a regional Middle School/Elementary competition on Sunday April 10. It’s Academic  has qualified two teams for the National History Bowl competition at the end of April.