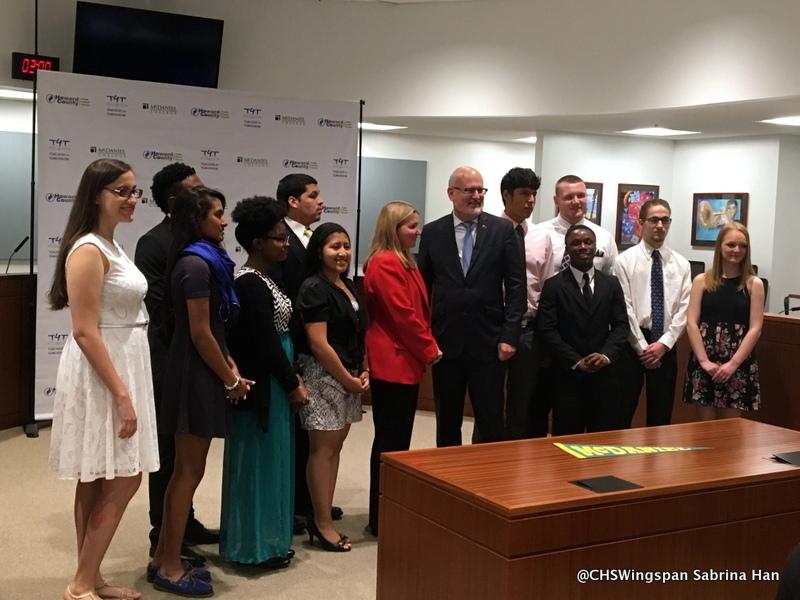 On Wednesday, May 4, the Howard County Public School System (HCPSS) and McDaniel College joined together to acknowledge the inaugural group of recipients of the Teachers for Tomorrow (T4T) scholarship.
The cohort of recipients, comprising six male and five female HCPSS students and representing six Howard County schools, was a very diverse and academically successful group.

Before introducing the recipients, Dr. Roger Casey, President of McDaniel College, shared a long list of achievements included in the resumes of these 11 students.

The students were born in six different countries and are fluent in a combined total of six languages – not including English. Additionally, the students represented multiple sports teams, honor societies, clubs, student governments, and more.

“One day, these students are going to help us change tomorrow,” Dr. Renee Foose, Superintendent of Howard County Schools said.

T4T is a program that was developed with the goal of increasing diversity and opportunity within the teaching workforce. In spring of 2015, Foose approached Casey with the idea for this program.

The selected students will receive a free education, with an agreement with HCPSS that, immediately following their graduation in 4 years, they will return to HCPSS to work for a minimum of 3 years.

Candidates for the program had certain requirements they had to meet. The intended group was full of academically successful students with limited resources. All applicants were required to qualify for the Free and Reduced Price Meals Program, as well as a certain academic criteria. Additionally, the recipients applied and were accepted into McDaniel College before being awarded the scholarship.

Forty HCPSS students applied to the T4T program and were accepted into McDaniel College. From that group, 20 were invited to partake in an interview process for selection. In April 2016, 11 students were notified of their success in obtaining the scholarship.

While studying at McDaniel, recipients will be required to maintain a minimum grade point average of 2.75. In addition, they must graduate in four years. Students will have the option to pursue a degree in any subject they choose, but are required to obtain at least a minor in education, and serve as a student teacher.

The goal of the program is to provide every available opportunity for students and open up new ones for students with limited resources.

Karalee Turner-Little, the Coordinator of HCPSS Systemic Initiatives, stated that this was one of the main reasons that the partnership with McDaniel College is so advantageous.

“McDaniel shares our philosophy about really supporting kids individually… [they] ensure that every student has what they need,” she said. “They were really a great match for this kind of partnership.”

Casey stated that he felt this program was a “great vision.” During the ceremony, he took time to congratulate the students and acknowledge the great achievement that winning this scholarship was.

“We had remarkable interest in this program…you should be very proud that you are the first group of people who have been chosen,” he said. “You are a great group of young people.”

During the ceremony, Cadet, a senior at Long Reach, addressed the group and shared who she was and what the scholarship meant to her.

While interviewing before she was chosen for the scholarship, Cadet shared that she feels she is called to serve through teaching.

“I am a proud Haitian and American who seeks to make a difference within her community and her countries,” Cadet said. She also shared her belief that it is “important to be passion driven when going after what you want.”

Cadet shared that she believes T4T will have a positive impact on her future.

“T4T has allowed me an opportunity to build a strong and stable future,” she said.

In addition to Cadet, Loyola, from Reservoir, had a chance to speak to the group about his personal experience, and what the program means to him. Loyola will be the first in his family to attend college, a goal of his since he was young.

“As a child, college was always a dream of mine. As I grew up, I saw [that] my opportunities to further my education declined as my knowledge of the college expense increased,” he said.

Loyola was informed about the T4T scholarship opportunity by his school counselor, and felt that it was the best way for him to obtain his long-time dream. Now, he looks to create a tradition that he hopes his younger brothers will follow.

“I’ll be showing them that hard work really does pay off,” he said.

To Bonsu, a senior at Wilde Lake, this scholarship means everything.

“We [my family] came from Ghana and we really didn’t have that much. And then to receive this opportunity is one of the best moments of my life right now,” he said.

The idea of becoming a teacher is new to Bonsu, but he is looking forward to being able to give back to the community using this opportunity.

“It’s kind of new to me right now, but when I really thought about it, I was like ‘You know, I can do this,’” he said. “I can actually help people out, like future students.”

Though teaching may not have been Bonsu’s original plan, he is extremely grateful for the opportunity he has been given, and looks to make the best of it.

“I’m glad I received it, and I really want to help out [in the future] with HCPSS,” he said.

Tanisha Rowe, mother of Kory Williams, who also attends Reservoir, shared with the group what the scholarship means to her and her family. In addition to sharing Williams’ story, and the hardships he has overcome, she spoke about how proud she was of her son, and how deeply the scholarship opportunity has affected their family.

“I [told] Corey from the time he was about three or four – he was destined for greatness,” she said. “You can see what a proud Mom I am…I set the tone, he followed. And he didn’t have to.”

Additionally, Rowe took time to acknowledge the success of her son, and the initiative he has taken in his endeavors.

“Everything you’ve seen from him – the words that he’s written for his opening speeches – are all Kory. We are extremely proud of him,” she said.

Both HCPSS and McDaniel College look forward to many more celebrations of this type to come.

“We definitely look to continue this every year,” Turner-Little said. “This is a huge endeavor for HCPSS and McDaniel College, and it will take a lot of people’s efforts and financial resources and commitment, but we do hope to have scholarship recipients every year.”

Aside from being a huge opportunity for a free education, this program provides a chance for Howard County students to give back to the school system they were brought up in, and have an effect on the futures of many students.

“Today we are beginning the first day to changing what tomorrow looks like,” Foose stated. “It’s normally a sad time when we see students leaving…but this isn’t such a sad day; this is a happy day because I’m going to see them back here in just a few years working for us in our classrooms, making a difference.”

For more information about the T4T scholarship program, contact your school principal or guidance counselor, and visit the HCPSS (www.hcpss.org) and/or McDaniel College (www.mcdaniel.edu) websites.