Centennial’s Performing Arts Department kicked off the holiday season with its performance of The Nutcracker on December 5 and 6 in the auditorium.

Members of Centennial’s dance, choir, band, orchestra, and theater programs all collaborated to produce the famous holiday ballet, which consisted of two acts and ran for approximately an hour and a half.

Although the dancers in the junior and senior dance companies were the focal point of the performance, choir members also sang and performed on stage at various points throughout the show. Band and orchestra members formed a pit orchestra below, providing a live soundtrack for the performance. Meanwhile, theater students served on the backstage crew and assisted with technical aspects of the production. 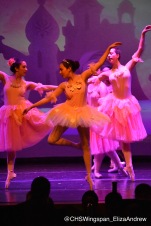